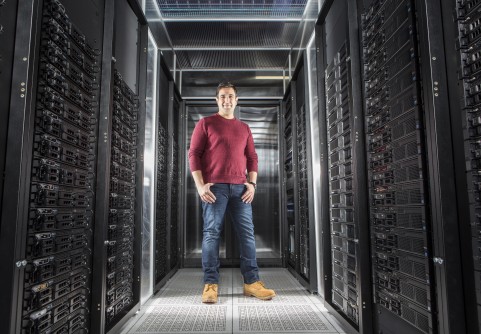 Newswise — Data centers — large clusters of servers that power cloud computing operations, e-commerce and more — are one of the largest and fastest-growing consumers of electricity in the United States.

The industry has been shifting from open-air cooling of these facilities to increasingly complex systems that segregate hot air from cold air. When it comes to cost savings, there are definite advantages to the aisle containment systems, which have been estimated to save 30 percent of cooling energy — but it’s not yet clear how they increase the risk of overheating, or how to design them for greatest safety and optimum energy efficiency.

In a poster titled “Experimentally Guided Advances of Computational Fluid Dynamics Modeling of Air-Cooled Data Centers in a Raised Floor Setting,” which won a contest at a recent meeting of ES2’s Industrial Advisory Board, Alissa lays the foundations for a systematic analysis of Binghamton’s new data center, using both empirical research and computer modeling.

“We included some guidelines for the initial characterization of data center facilities, such as air flow, turbulence, pressure, velocity, momentum and cooling capacity,” says Alissa, who began his work in heat and mass transfer as an undergrad at the Hashemite University in Jordan and a master’s student at Jordan University of Science and Technology. “There are certain things data center modelers seem to oversimplify, and in order to effectively reduce the energy cost, it is important to create accurate models.”

At a large data center, the cost savings could be hundreds of thousands of dollars a year, which is why the solution is so important to ES2, a National Science Foundation Industry/University Cooperative Research Center. Partners in ES2 include Georgia Tech, the University of Texas at Arlington and Villanova University, along with Bloomberg, Comcast, Facebook, Future Facilities, IBM, Intel, NYSERDA and Verizon.

During the next two years, Alissa expects to refine his analysis, cycling back and forth between data collection and computational fluid dynamics, validating his models along the way.

“Husam has done a very good job establishing a strong technical base for this research,” says IBM Senior Engineer Ken Schneebeli, who served as a mentor on the poster, along with ES2 director Bahgat Sammakia; Future Facilities’ Mark Seymour; IBM’s Roger Schmidt; and Villanova’s Alfonso Ortega. “This is a subject of critical business importance that has not yet been investigated at the university level or at the industry level, and Husam is establishing a basis to ably assert the accuracy of his modeling and methodologies. He has the patience, confidence and thoroughness to take on a project of this size.”