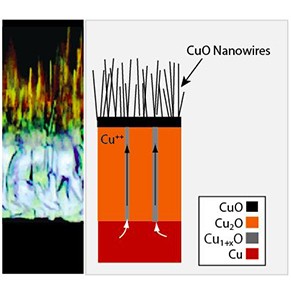 The schematic illustration of the cross-section and phases observed during copper oxidation. The center photo shows the copper being pushed upward through the grain boundaries to become nano wires.

Newswise — By looking at a piece of material in cross section, Washington University in St. Louis engineer Parag Banerjee, PhD, and his team discovered how copper sprouts grass-like nanowires that could one day be made into solar cells.

Banerjee and his team worked with copper foil, a simple material similar to household aluminum foil. When most metals are heated, they form a thick metal oxide film. However, a few metals, such as copper, iron and zinc, grow grass-like structures known as nanowires, which are long, cylindrical structures a few hundred nanometers wide by many microns tall. They set out to determine how the nanowires grow.

“Other researchers look at these wires from the top down,” Banerjee says. “We wanted to do something different, so we broke our sample and looked at it from the side view to see if we got different information, and we did.”

The team used Raman spectroscopy, a technique that uses light from a laser beam to interact with molecular vibrations or other movements. They found an underlying thick film made up of two different copper oxides (CuO and Cu2O) that had narrow, vertical columns of grains running through them. In between these columns, they found grain boundaries that acted as arteries through which the copper from the underlying layer was being pushed through when heat was applied, creating the nanowires.

“We’re now playing with this ionic transport mechanism, turning it on and off and seeing if we can get some different forms of wires,” says Banerjee, who runs the Laboratory for Emerging and Applied Nanomaterials (L.E.A.N.).

Like solar cells, the nanowires are single crystal in structure, or a continuous piece of material with no grain boundaries, Banerjee says.

“If we could take these and study some of the basic optical and electronic properties, we could potentially make solar cells,” he says. “In terms of optical properties, copper oxides are well-positioned to become a solar energy harvesting material.”

The find may also benefit other engineers who want to use single crystal oxides in scientific research. Manufacturing single crystal Cu2O for research is very expensive, Banerjee says, costing up to about $1,500 for one crystal.

“But if you can live with this form that’s a long wire instead of a small crystal, you can really use it to study basic scientific phenomena,” Banerjee says.

Banerjee’s team also is looking for other uses for the nanowires, including acting as a semiconductor between two materials, as a photocatalyst, a photovoltaic or an electrode for splitting water.

The School of Engineering & Applied Science at Washington University in St. Louis focuses intellectual efforts through a new convergence paradigm and builds on strengths, particularly as applied to medicine and health, energy and environment, entrepreneurship and security. With 82 tenured/tenure-track and 40 additional full-time faculty, 1,300 undergraduate students, 700 graduate students and more than 23,000 alumni, we are working to leverage our partnerships with academic and industry partners — across disciplines and across the world — to contribute to solving the greatest global challenges of the 21st century.

The Royal Society of Chemistry, Feb. 2014