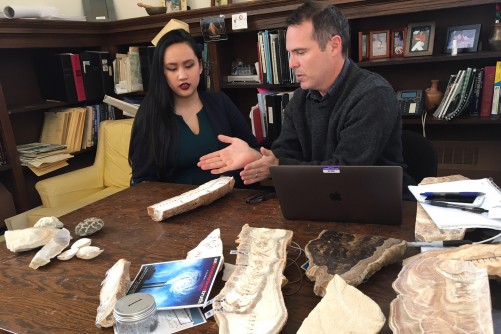 Newswise — The National Science Foundation has awarded Cornell College Professor of Geology Rhawn Denniston a grant in the amount of $51,645 to examine how prehistoric fire activity may be recorded by stalagmites.

Since 2007, Denniston has studied prehistoric Australian monsoon rains and hurricane activity by measuring chemical compounds and mud layers in stalagmites from caves across the Australian tropics.

The chemistry of the stalagmites preserves past climate variability so that each layer maps out a timeline of past climatic change. Small amounts of uranium incorporated into the stalagmites serve as a stopwatch, recording the time since that layer was formed.

“Many of the chemical signals of past climate are derived from the rain and the soil. The cave we are studying is close to the surface with very little rock or soil above it,” Denniston said. “Thus, as water drips into the cave, the stalagmites record even short-term changes in climate. And whenever there’s a fire, we think the chemical compounds go right into the cave and thus the stalagmites.”

Cornell College junior Huong Quynh Anh Nguyen will help perform this work at a lab in Italy working with other researchers and specialized equipment.

“I’ll be drilling into the layers of the stalagmite, which will produce a powder,” Nguyen said. “I will use the powder, dissolve it in a solvent, and analyze it using a mass spectrometer to collect our data.”

The primary goal of this research project is to extract a multi-century-long record of fire activity and to refine the stalagmite-based fire reconstruction method, allowing it to be applied to other tropical areas. Historical records have only tracked fires in the Australian tropics in detail for about the past 100 years, but the stalagmites go back thousands of years.

“Reconstructing prehistoric fire activity is really hard to do, but it’s very important. Fire impacts regional ecosystems and even climate,” Denniston said. “If we can develop a new method for reconstructing ancient fires, that’s a big advance.”

This process will also help them to test whether there’s a connection between the frequency of fires and either climate or land use. Both Aboriginal peoples and European settlers have been linked to periods of changing fire activity.

“There is a big debate surrounding the role of Aboriginal peoples in determining rates of burning for the past several thousand years, and of European pastoralists in the 19th century,” Denniston said. “This work may help address these questions.”

Previous work by Denniston, his students, and colleagues have shown that the amount of rainfall this region experienced has varied over the centuries. Denniston hopes to test whether increases or decreases in rainfall are matched by simultaneous changes in fire activity. The cave that produced these stalagmites is well-suited for addressing this latter question as it is located in the monsoonal region of the Australian tropics, in the part of Australia with the highest annual number of lightning strikes, the primary natural source of ignition.

Nguyen said she’s looking forward to her summer research in Italy where she can apply her chemistry knowledge to this geology project. Last summer, she conducted research on campus for the Cornell Summer Research Institute, and she’s thankful for the many opportunities throughout her time at Cornell College, especially as she charts out her future.

The pair is hoping to pave the way in this scientific process with this exploratory grant from NSF as they study this new avenue for understanding prehistoric fire activity. Nguyen and Denniston will present their results at a conference next year and plan to publish their findings in the future.

The Division of Environmental Biology at the National Science Foundation funded this work.