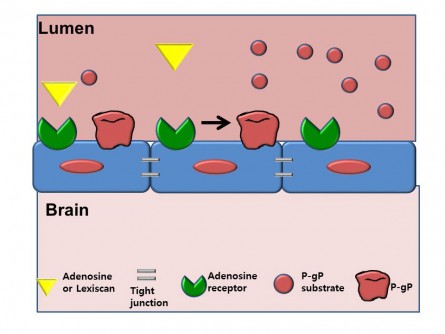 Newswise — Cornell researchers have discovered a way to penetrate the blood brain barrier (BBB) that may soon permit delivery of drugs directly into the brain to treat disorders such as Alzheimer’s disease and chemotherapy-resistant cancers.

The BBB is a layer of endothelial cells that selectively allow entry of molecules needed for brain function, such as amino acids, oxygen, glucose and water, while keeping others out.

“We can open the BBB for a brief window of time, long enough to deliver therapies to the brain, but not too long so as to harm the brain. We hope in the future, this will be used to treat many types of neurological disorders,” said Margaret Bynoe, associate professor in the Department of Microbiology and Immunology in Cornell’s College of Veterinary Medicine. Bynoe is senior author of the study, which appears in The Journal of Clinical Investigation.

Bynoe’s team was able to deliver chemotherapy drugs into the brains of mice, as well as large molecules, like an antibody that binds to Alzheimer’s disease plaques, according to the paper.

The lab also engineered a BBB model using human primary brain endothelial cells. They observed that Lexiscan opened the engineered BBB in a manner similar to its actions in mice.

Because Lexiscan is an FDA-approved drug,”the potential for a breakthrough in drug delivery systems for diseases such as Alzheimer’s disease, Parkinson’s disease, autism, brain tumors and chemotherapy-resistant cancers is not far off,” Bynoe said.