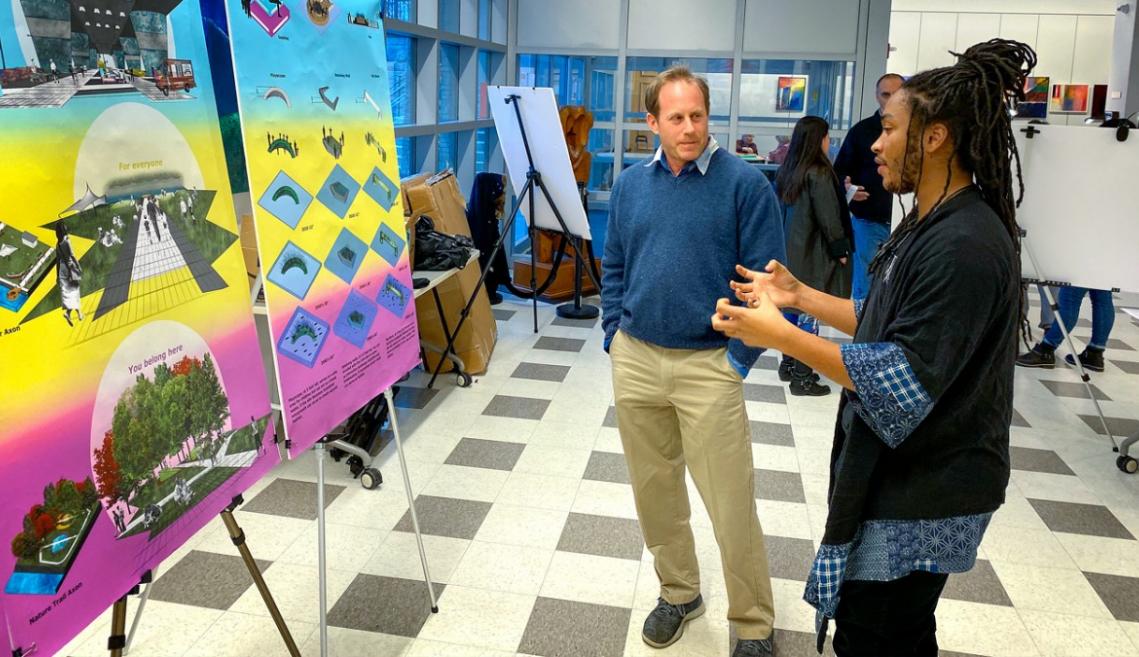 Cornell graduate student Juwan McIntyre, right, explains the function of the playscape he designed for Ossining. The playscape can be used contemporarily and to control Hudson River flooding, then serve as an underwater habitat if the site becomes permanently inundated.

Newswise — ITHACA, N.Y. – The banks of the Hudson River shore at Ossining, New York, may seem tranquil now, but the Westchester County town – and other villages along the river – face a watery future: Due to projected climate change effects, the Hudson is rising.

In a report released two years ago, the New York State Department of Environmental Conservation (NYS-DEC) projected that the lower Hudson River could rise 2-10 inches by the late 2020s. That projection soars to 8-30 inches in the 2050s, and to as many as 58 inches – nearly five feet – by the 2080s. The water may rise to 75 inches higher, from the current base, at the turn of the next century.

Josh Cerra, associate professor in landscape architecture, teaches the climate-adaptive design studio course. Students taking the class have offered ideas for other Hudson River towns since 2015, when the studio started.

While no formal plans exist for Ossining’s future waterfront, the residents are discussing a collective action. The city of Kingston, New York, and the village of Piermont, New York – where Cerra’s previous classes presented their visions in earlier years – have begun working with the NYS-DEC and professional design firms in mid-2019 to develop projects – inspired in part by the students’ ideas – to boost waterfront resiliency.