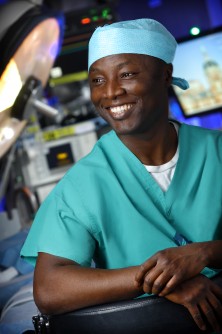 Left with facial paralysis following surgery to remove a brain tumor, Anthony struggled to blink, drink or smile. Follow Anthony’s journey as he has a masseter nerve transfer and eyelid surgery performed by facial plastic and reconstructive surgeon Kofi Boahene to improve his quality of life.

Newswise — A cosmetic surgery that uses injections of hyaluronic acid to make lips appear fuller could also improve the lives of people with facial paralysis, according to results of a small study by researchers at Johns Hopkins and Stanford universities.

Facial paralysis causes both physical and psychological problems, says Kofi Boahene, M.D., a facial plastic and reconstructive surgeon in the Department of Otolaryngology-Head and Neck Surgery at the Johns Hopkins University School of Medicine and an author of a published report about the study appearing June 18 in the journal JAMA Facial Plastic Surgery. “It’s a very large problem,” he notes, “that can occur because of stroke, Bell’s Palsy, muscular dystrophy, trauma and birth defects.”

Without lip control, patients struggle with drooling, eating and drinking without spillage, and making sounds that require fully closing the lips, such as words containing the letters “b” and “p.” Many individuals with facial paralysis also become self-conscious about how they look.

Boahene says he stumbled across a possible role for hyaluronic acid injection while working with a patient with a then-undiagnosed case of muscular dystrophy. Her face was weak, and she had trouble speaking. To improve her lip muscle tone, he tried the injection and says the effects were immediate. Her face appeared stronger, and her articulation markedly improved.

“To maintain structure, plants fill their leaves and stems with water,” Boahene says. “It’s a crude analogy, but injecting the lips with hyaluronic acid works in much the same way. It tones the tissue surrounding the muscle.”

To test the procedure, Boahene and his collaborators recruited 22 patients (14 women and eight men) with facial paralysis on one side of the mouth along with three patients with muscular dystrophy who had lost control of both sides of the mouth.

Baseline measures of lip tone were performed by having participants place their lips around an instrument that measured pressure and took readings from the left, middle, and right sides of the mouth. (The three patients with muscular dystrophy suffered from uniform weakness across the lips, while the rest of the patients had lost control on one side only). The researchers then identified the weakest points by having participants blow air with pursed lips. At points where air escaped, the researchers injected the hyaluronic acid.

To see how well those improvements carried over to daily life needs, a speech therapist conducted a before-and-after assessment of the patients’ ability to speak and to eat and drink without spilling. All 25 patients showed marked improvement, Boahene says. Plans are underway to confirm the benefits in a larger study with about 100 patients.

The effects of the injections, which cost between $500 and $2,000, are temporary, lasting about a year when done for cosmetic purposes. When done for cosmetic improvement, insurance typically does not cover the bill. However, insurance companies typically make an exception when the benefits are primarily therapeutic, Boahene says. Lip injection is a minimally invasive outpatient procedure that can be performed by dermatologists and plastic surgeons; however, Boahene says, it is important that therapeutic injections be performed by physicians experienced in treating and managing facial paralysis and muscle weakness.

Boahene says that if the 25 patients continue to show improvement without any marked side effects, he might pursue tests of longer-lasting solutions, such as removing fat from elsewhere in the body and injecting it around the mouth.

Moreover, he says, the procedure may also help patients whose facial nerves have been repaired but who need temporary lip help while full healing from such repairs occurs.

Other authors on the paper are Heather Starmer of Stanford University and Sofia Lyford-Pike, Lisa Earnest Ishii, and Patrick Byrne of The Johns Hopkins University.