Could Drones Save Cows? Why University of Kentucky Research Team Thinks So 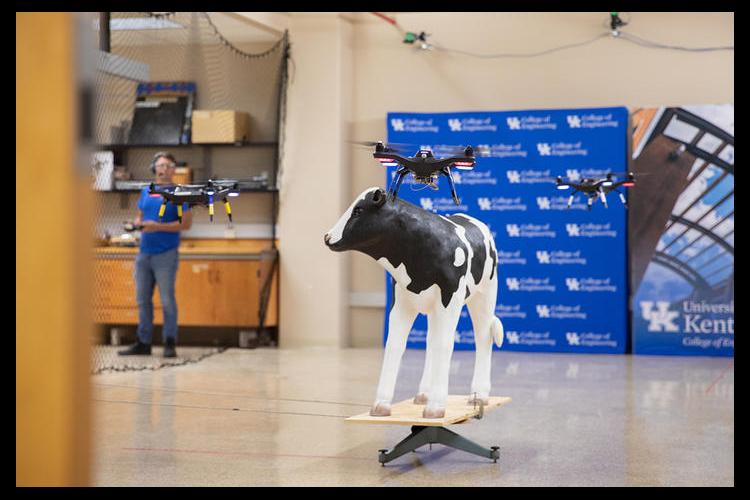 In the basement of an engineering building on UK's campus, there's a calf replica who goes by the name of Chuck. Chuck has been instrumental in perfecting the machine-learning and UAV-formation-control technology. Photo by: Eric Sanders. 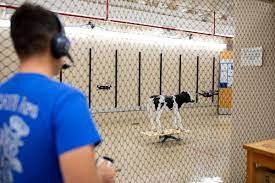 A software program the team has custom-built tells the drones when to execute maneuvers such as maintaining formations around a cow and tracking the cow. Photo by: Eric Sanders. 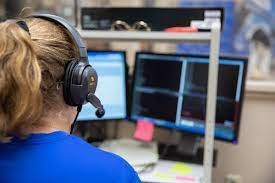 In the basement of an engineering building on UK's campus, there's a calf replica who goes by the name of Chuck. Chuck has been instrumental in perfecting the machine-learning and UAV-formation-control technology. Photo by: Eric Sanders.

Newswise — LEXINGTON, Ky. (Jan. 27, 2020) — It's a staggering statistic — every year nearly 3 million cows in the U.S. die from health problems. And it's costing the cattle industry more than $1 billion.

Combating this economic loss starts at the producer level. Ultimately, improved observation of cows in the pasture is proven to reduce herd loss. Sounds simple enough — right? But beef cattle spend a significant amount of time outside, which makes constant monitoring problematic.

Could eyes in the sky be the answer?

Jesse Hoagg, the Donald and Gertrude Lester Professor of Mechanical Engineering at the University of Kentucky, thinks so. With the help of a $900,000 grant from the United States Department of Agriculture, he is diligently working on a noninvasive health monitoring approach using unmanned aerial vehicles (UAVs) — otherwise known as drones.

The drones would provide farmers with a way to remotely and autonomously check on the location and health of each cow — allowing them to address cattle health and safety issues much sooner.

“This project tackles an important problem — reducing cattle loss," Hoagg said. "And the approach that we are developing is highly interdisciplinary, drawing on expertise in robotics, computer science, control systems, agricultural engineering and livestock systems."

Josh Jackson, an assistant extension professor in the College of Agriculture, Food and Environment and a cattle producer, said the motivation for the project came while he was trying to find his Angus herd in the dark.

“Many Kentucky cattle producers have jobs off the farm, and it gets tricky to locate cows this time of the year — when the sun sets so early,” he explained. “We want to lessen producers’ stress by helping them locate their animals quicker and help sick animals faster.”

The new system aims to identify each cow in a pasture through unique characteristics such as facial features and measure vital health information like size and physical activity.

You're probably wondering, how exactly would this technology work? In an effort to answer that very question, Hoagg and his team of professor and student researchers have been conducting experiments.

In the basement of an engineering building on UK's campus, there's a calf replica who goes by the name of Chuck. Chuck has been instrumental in perfecting the machine-learning and UAV-formation-control technology.

As Hoagg explained, “Our indoor UAV flight facility allows us to develop and test formation control approaches in a controlled environment. This is an important first step before outdoor testing.”

Here's how the system works. An observer drone hovers 50 to 100 feet above the herd. Using stereo cameras, this drone tracks motion to determine the location of the cattle. Meanwhile, three worker drones use that location information to track a specific cow. The worker drones then perform the health monitoring tasks.

A software program the team has custom-built tells the drones when to execute maneuvers, such as maintaining formations around a cow and tracking the cow.

Zack Lippay, the doctoral student leading these test flights, has dedicated more than two years to the project. “We’re trying to prove that this method is safe," he explained. "Everything is completely autonomous, but we have a fail-safe where pilots can take over if things get unstable.”

As previously mentioned, machine learning technology plays a crucial role — especially when teaching the drones how to identify one cow from another and estimate physical characteristics. Essentially, the team is training the software to recognize each cow's face so that physical measurements of an individual cow can be tracked over time. To do this, 3D models will be constructed using real images of cows.

Michael Sama, associate professor of biosystems and agricultural engineering, and Ruigang Yang, professor of computer science, are leading this component of the project. “Part of this effort is to simply collect the massive amount of imagery necessary to develop custom machine learning technology suitable for individual cow identification,” Sama explained. “We’re trying to understand the best way to acquire images remotely, how to efficiently extract information from those images that provides value to cattle producers.”

Lastly, the team also needs to ensure there won’t be any adverse effects caused by drones hovering near the cattle. Trials are already underway, at the C. Oran Little Research Center in Versailles, Kentucky, to test how cows react to the drones. Gabriel Abdulai, a doctoral student in biosystems and agricultural engineering is focusing his studies on cattle response to drones. Three days a week, the team performs test flights. So far, the heart rates among the herds circled by drones remain stable and the cattle have shown no other signs of stress.

“By studying the physiological and behavioral response of beef cattle to drones, we want to ensure that this great technology is not a stressor," Abdulai said. "This is because stressed cattle often spend less time grazing and are difficult to handle, which can impact daily weight gain and handling operations”

Though the project is far from being completed, early results are promising. The hope is, someday the technology being developed could be commercialized and used to improve the productivity of small-herd cattle producers.

“This project aims to make transformational progress on the use of autonomous UAVs for monitoring cattle health and thus improve the security of a critical food resource and improve the economic outlook for rural beef producers," Hoagg said.

The project is slated to continue through February 2021.

Caption: In the basement of an engineering building on UK's campus, there's a calf replica who goes by the name of Chuck. Chuck has been instrumental in perfecting the machine-learning and UAV-formation-control technology. Photo by: Eric Sanders.