Could pancreatitis be a stress hormone deficiency? 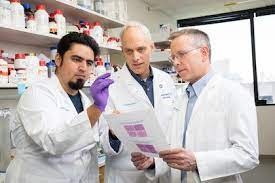 Newswise — DALLAS – Jan. 8, 2020 – In work that could have clinical implications, UT Southwestern researchers find that humans and mice with pancreatitis are deficient in a stress hormone called FGF21. Normally, FGF21 is more abundant in the pancreas than in any other organ in the body. They also show that replacement therapy reverses the condition in mouse models in about 24 hours and may even prevent it.

“Given that several FGF21 drug candidates are or soon will be in clinical trials for conditions related to metabolic disease, it may be possible to test fibroblast growth factor 21 for treating human pancreatitis in the near future,” says David Mangelsdorf, Ph.D. In addition to being chair of pharmacology, Mangelsdorf is an investigator in the Howard Hughes Medical Institute (HHMI). He adds that he knows of no current investigations of PERK inhibitors for clinical use.

Pancreatitis, a debilitating and sometimes deadly inflammation of the pancreas, can be acute or chronic. It accounts for about 275,000 U.S. hospitalizations each year, with its incidence on the rise for reasons that are unclear. The many causes of pancreatitis include long-term alcohol abuse, gallstones, and certain inherited conditions, according to the National Institute of Diabetes and Digestive and Kidney Diseases (NIDDK), part of the National Institutes of Health (NIH). Pancreatitis also can occur as a complication of endoscopic retrograde cholangio-pancreatography, or ERCP, a procedure in which a camera, contrast dye, and X-rays are used to view the bile duct, gall bladder, and pancreatic ducts.

Treatment for acute pancreatitis is generally supportive. Most patients recover after a few days in the hospital, where they are given intravenous fluids and pain relief. Chronic pancreatitis, which is more common in those with alcohol use disorder, worsens over time. The progressive damage to the pancreatic tissue can affect the ability to digest food and sometimes requires  prescription enzymes to avoid malnutrition.

The pancreas, an organ near the small intestine, creates the hormone insulin that helps keep blood sugar in balance. The organ also creates enzymes that normally get released into the small intestine to aid digestion, says Mangelsdorf, who runs a joint laboratory with Steven Kliewer, Ph.D., professor of molecular biology and pharmacology. For nearly two decades the researchers have studied FGF21, learning valuable information about this important metabolic hormone.

In 2017, the researchers reported the hormone’s role in keeping digestive enzymes from damaging the pancreas. “We found that FGF21 stimulates the pancreas to secrete digestive enzymes into the small intestine,” Mangelsdorf says. “If this mechanism fails, the enzymes remain in the pancreas, where they damage the tissue and cause inflammation.”

Mangelsdorf says his and other labs have shown that loss of FGF21 magnifies damage and slows recovery in animal models of pancreatitis. That led him and collaborators at the University of Pittsburgh, Stanford University in California, and Shanghai Jiao Tong University in China to wonder whether the stress hormone might hold promise as a pancreatitis therapy.

To answer that question, the researchers studied the effect of pancreatitis on the FGF21 pathway by analyzing samples from the pancreata of mice and humans with acute and chronic forms of the disease. They found in mice that pancreatic levels of FGF21 rose during the first four hours of pancreatitis and, unexpectedly, dropped at the 12-hour mark, becoming nearly undetectable after 18 hours. FGF21 was also reduced in human pancreatitis.

The researchers conducted several experiments using each of the three mouse models, repeating each investigation three to four times with three to eight mice per test group. They also ran experiments on 66 human tissue samples: 14 from healthy people and 52 from people with pancreatitis.

Injecting 1 milligram per kilogram of mouse body weight of FGF21 four times over a 12- to 16-hour period after inducing pancreatitis increased the amount of FGF21 in the bloodstream and caused inflammation, necrosis, and swelling to mostly disappear within 24 hours in the mice with drug- or alcohol-induced pancreatitis.

To see if they could somehow prevent ERCP-induced pancreatitis, the researchers mixed FGF21 with the contrast dye normally used in the procedure and found that by doing so, they were able to maintain normal FGF21 levels and prevent them from dropping, thereby preventing procedure-induced inflammation.

Mangelsdorf cautions that the study’s limitations include that the models mimicked but fell short of completely reproducing human disease, and that a definitive conclusion about pancreatitis in humans will require an analysis of a greater number of test subjects.

“Nevertheless, we show that pancreatitis is broadly characterized as an FGF21-deficient state and restoring FGF21 pharmacologically reverses or prevents it,” he says.

The research was funded by the NIH (R0IDK067158, P01AG051459, R0IDK103002, R0IDK093491), the Robert A. Welch Foundation, the Ford Foundation, the Juvenile Diabetes Research Foundation, UT Southwestern’s Harold C. Simmons Comprehensive Cancer Center, and the HHMI. The FGF21 protein was provided by Novo Nordisk. Mangelsdorf, Kliewer, and Hernandez collaborate and have received travel reimbursement from the drug company. Those three researchers are authors of a patent related to this work: “Methods and compositions for the treatment of secretory disorders” (US20190201490A and WO2017205517A1).