Could Seaweed Save California’s Coast?

CSU faculty researchers find that marine plants could play a big role in reducing ocean acidification, a devastating side effect of climate change. 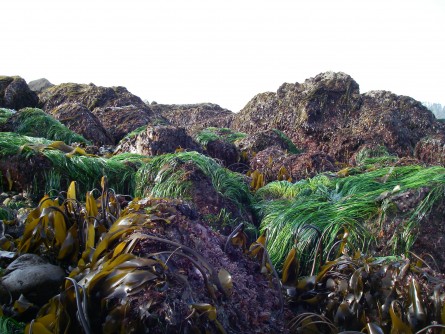 Researchers are studying kelp and eelgrass for their potential to increase ocean water's pH on a local level, benefitting sea life and coastal ecosystems.

​One of the many devastating side effects of climate change is this: The planet's seas are absorbing carbon dioxide from the atmosphere, making the water much more acidic.

Ocean acidification (OA), as it's called, lowers the pH level in the ocean, making it harder for marine animals like shrimp and oysters to form their shells. More acidic oceans may also change the behavior of fish.

It may be difficult to stop OA on a global scale, but a recent report co-authored by five California State University (CSU) faculty from around the state has found some encouraging news for local-scale mitigation: Underwater plants like kelp and seagrass may help marine life cope with less-hospitable ocean water.

"A lot of people are not aware how strikingly challenging OA could be in our future," says Karina Nielsen, Ph.D., co-chair of the working group that produced the January 2018 report, "Emerging Understanding of Seagrass and Kelp as an Ocean Acidification Management Tool in California."

"We are already seeing the effects of it now," says Dr. Nielsen, who is also professor of biology at San Francisco State University and director of the campus's Estuary & Ocean Science Center.

"Large-scale impacts of OA could potentially change the entire oceanic food web, which would be devastating for human populations that depend on it heavily for food," says Krista Kamer, Ph.D., director of CSU Council on Ocean Affairs Science and Technology (COAST). Ocean Acidification could also impact highly visible species that people tend to care about, like whales, turtles and sea birds, Kamer adds.

Working Fast to Find a Solution

The Ocean Protection Council Science Advisory Team (OPC-SAT) Working Group, which is administered by the California Ocean Science Trust, brought together a group that included five CSU faculty to study whether aquatic plants might protect vulnerable species on California's coast.

"Kelp and seagrass do have the capacity to locally increase the pH of seawater," Nielsen says, explaining that the plants provide a sort of low-acid refuge for species like oysters, abalone, crab and fish that hang out there.

The report highlights two species of eelgrass — a type of underwater coastal seagrass — and two species of kelp believed to have the greatest pH-raising potential in California.

Report co-author Kerry Nickols, Ph.D., assistant professor of biology at CSU Northridge, specializes in kelp research and says kelp and seagrass are quite different in the way that they grow and support marine habitats, and kelp is much larger.

"Kelp is really productive — it can grow up to a foot a day," Dr. Nickols says, adding that the sheer size and speed of growth of these plants offers tremendous potential for future research.

“The top of the kelp — the canopy — is where all the new growth is, and this is where we are finding the higher pH levels,” Nickols says. “We still need to determine how far the pH benefits can extend in the water, and how marine life can benefit.”

"The key take-home message from the report is that investing in eelgrass and kelp conservation and restoration is a win-win," Nielsen explains. That's because these underwater seagrass meadows and kelp forests have so many other benefits, including reducing coastal erosion and creating a home for all kinds of marine life.

Since scientists first coined the term ocean acidification in 2003, and its emerging threat to marine life was recognized, researchers have been looking for solutions to slow the increasing acidification of ocean water. This has included geoengineering ideas such as and adding large amounts of iron to seawater to increase phytoplankton growth, which could help trap carbon dioxide in the deep ocean.

In contrast, conserving and restoring marine plants provides a natural adaptation, Nielsen says. "No other research holds as much promise for having clear, cost-effective benefits without the risk of unintended consequences."​

The new report places more emphasis on the potential of eelgrass, she adds, because it may be able to capture and store CO2 for the long term, similar to the way trees are able to pull CO2 from the atmosphere. Scientists call this carbon sequestration.

The next phase of the research will determine when and where eelgrass meadows and kelp forests may be most beneficial in California. And to quantify how much carbon the plants can remove from the water and store for a very, very long time. "If researchers are able to quantify substantial carbon sequestration benefits," Nielsen notes, "eelgrass restoration and conservation projects could have financial value in carbon markets," and even bring revenue to the state.

"The ocean is an iconic part of California's identity. OA is a big threat to that," she says, adding that it's not just what's under the water that may suffer. In addition to harming marine life and the economic consequences of the state's fisheries, OA may also affect tourism and recreation — a major part of California's coastal economy.

"If the things that draw people to California are negatively impacted, the identity and the cultural landscape of the state could potentially be at risk."

Members of the OPC-SAT Working Group presented key findings from the January 2018 report at a California State Assembly hearing of the Select Committee on Coastal Protection and Access to Natural Resources in Sacramento on February 6, 2018.

Impact of the CSU:  A Commitment to Mitigating Climate Change

"This shows what a terrific job the CSU and SFSU are doing in training professionals who are well-versed in science and really good at working across sectors," says Karina Nielsen, Ph.D., SFSU professor of biology and report co-author. "The interdisciplinary training that they got through their work at CSU is an incredibly valuable professional skill."

It's that intersection of science and policy and evidence-based decision making that excites Nielsen and her colleague, Kerry Nickols, Ph.D., assistant professor of biology at CSU Northridge and report co-author.

"It's exciting to be in California, where our legislators have a commitment to adapting to and mitigating climate change, and that they are including scientists in this conversation," Dr. Nickols says.