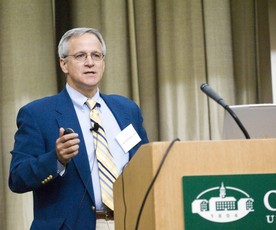 Newswise — The prevalence of diabetes throughout seven counties of Southeastern Ohio may be almost twice as high as the state and national averages according to a survey by the Appalachian Rural Health Institute (ARHI) and Voinovich Center for Leadership & Public Affairs at Ohio University. The seven counties surveyed were Jackson, Meigs, Morgan, Perry, Ross, Washington and Scioto. Perry and Morgan counties were first and second, respectively, for the highest prevalence of diabetes. Results from all seven counties were higher than state and national diabetes rates.

The survey, funded by the Ohio Diabetes and Control Program of the Ohio Department of Health, also found that almost one-quarter of those who responded were taking neither insulin nor other diabetes medication to help treat the disease.

"The results of this survey indicate that persons in Appalachian Ohio have prevalence rates for diabetes equivalent to those reported for high risk ethnic groups in the country," says Frank Schwartz, M.D., director of ARHI's Diabetes/Endocrine Center and OU-COM associate professor of endocrinology. Schwartz was the principal investigator for the study.

Diabetes is a disease in which the body does not adequately produce or utilize insulin, which stimulates the transport of blood glucose (sugar) into body cells. Unchecked or untreated diabetes leads to hyperglycemia — highly elevated levels of blood glucose. The complications of untreated and/or long-term diabetes comprise a number of life-impairing and life-threatening illnesses such as heart disease and stroke, which account for roughly 65 percent of diabetes-related fatalities; high blood pressure; diabetic retinopathy (blindness); kidney disease; nerve damage; amputations; dental disease; pregnancy problems; and sexual dysfunction.

According to the Centers for Disease Control and Prevention's 2004 Behavioral Risk Factor Surveillance System (BRFSS) survey, the world's largest telephone survey, the nationwide prevalence of diabetes was 7.2 percent; the rate was 7.8 percent for Ohio. Perry County, according to the ARHI study, had a rate of 14.2 percent. Ross County was the lowest, at 10.2 percent. ARHI's survey methodology parallels that of the BRFSS.

"Within Appalachia there are clusters of counties that are at higher risk, and they tend to be more devastated economically and have lower group socioeconomic status," says Schwartz.

Schwartz says that many of Ohio's 29 Appalachian counties have a disproportionately high number of people who live at or near poverty level, have lower education levels, suffer from obesity and lead unhealthy lifestyles.

Currently, there is no cure for diabetes. According to the American Diabetes Association (ADA), there are almost 21 million Americans with diabetes, of which almost 6 million are unaware of their disease. Schwartz believes that there could be higher prevalence rates of diabetes in the seven counties than even the ARHI study indicates. This is possible, considering ADA statistics and that these people are residents of counties that are classified as medically underserved by the U.S. Department of Health and Human Services.

Schwartz and other health-care professionals and educators are among those leading the fight against diabetes in Southeastern Ohio. The ARHI study was conducted under the auspices of Gov. Robert Taft's Appalachian Diabetes Initiative and was funded in part by the Ohio Diabetes Prevention and Control Program. Both have helped fund ARHI's Diabetes Initiative, of which the Diabetes/Endocrine Center plays the leading role. ARHI was created by the College of Osteopathic Medicine and College of Health and Human Services in 2003.

This past Wednesday, June 6, ARHI held its quarterly conference of diabetes educators and health-care professionals at Ohio University. The quarterly sessions, which focus on the research and work in progress toward developing more comprehensive diabetes care and outreach programs in Appalachia Ohio, are an outgrowth of ARHI's Diabetes Initiative. Wednesday's conference examined barriers to diabetes care in Appalachia and unveiled the results of the ARHI study.

The goal at the College of Osteopathic Medicine and Ohio University, says Schwartz, "is to have a research and clinical diabetes program that goes from the scientific bench to the patient's bedside" for Southeastern Ohio. In order to accomplish that, he says you need not only scientists and clinicians treating diabetes at the molecular and patient care levels, you must work to put into place educational and social networks and coalitions that bring together all those who are involved with diabetes care in this region.

"We started out as a group of diabetes educators. We were the zealots. Now we're adding anyone who is involved in the delivery of health care and chronic care in Southeastern Ohio. These are people who are involved with helping those at every socioeconomic level through the region. We are seeking to work with governmental agencies, county extension agencies and the school systems, as well. We're all participating in this process to fashion effective ways of intervening from the standpoint of governmental policies and outreach health-care programs, to preventing diabetes at the molecular level."

Carole Merckle has been part of this developing network for more than a year. Merckle is the director of health education for the Perry County Health Department, the county with the highest reported diabetes prevalence rate.

The obesity epidemic has fueled the rise in diabetes, says Merckle. "We've got an epidemic of Type 2 diabetes. We've got huge numbers of adults with diabetes. It's not just Perry County. Unfortunately, our rates are higher than the other counties." Complicating the proper treatment and care of the rising numbers of those with diabetes, says Merckle, are social and economic issues that affect the ability and willingness of diabetics to properly manage their diabetes and that limit the kinds of care that they are going to seek out and be able to afford.

"Too many diabetics don't believe they have diabetes unless they are taking insulin. I've had patients over the years tell me, 'Oh, I've just got a touch of diabetes. Or I've just got a little bit of diabetes.' If they were on oral medications, they really didn't think they had diabetes. This is because of a lack of education about diabetes.

Almost one-quarter of those responding to the survey in Perry County says they were unable to regularly see a health-care provider because of cost. What's needed, says Merckle, is funding to pay for diabetes medication and educational programs in Perry County for the uninsured and underinsured.

"Diabetes is a day-to-day disease. You're living with it day in and day out of your life. It's not like high cholesterol. You can eat a big steak at one meal, and it won't make a huge impact on your overall cholesterol if you're properly monitoring what you eat otherwise. With diabetes that's not the case. If you're diabetic and load up on carbohydrates in one meal, you're going to have a reaction to that. If your blood sugar goes too high or too low, you suffer the consequences. It's a very hard disease. You can't get away from it for an hour or two. It's with you all the time."

"Most diabetics in my area did not test their blood sugar every day," says Norma Torres, R.N., former health commissioner for Meigs County, who attended the conference. "And if they test it — and they should test it four or five times a day — they don't write it down." And not all physicians use the A1C test, she says, which is a much better indicator of blood sugar levels.

"A lot more education is needed. We need a lot more professionals to get involved in diabetes education. I believe we need to have a diabetes educator in every county, someone who could be available and accessible in a manner similar to the patient navigators employed by the American Cancer Society." This is someone who can call and who would provide you with the needed resources and help available, Torres says.

"In the laboratory we could come up with the best cure for diabetes," says Jack Bantle, Ph.D., vice president for research at Ohio University, "but if you can't get the patient to take it when he or she is supposed to take it, it won't work. You really have to understand (the issues of) care — from the bench to the bedside."

And with the help of ARHI's Diabetes Initiative, there are dozens of health-care educators and professionals, such as Merckle and Torres, preparing to take on the as yet incurable but treatable disease of diabetes.