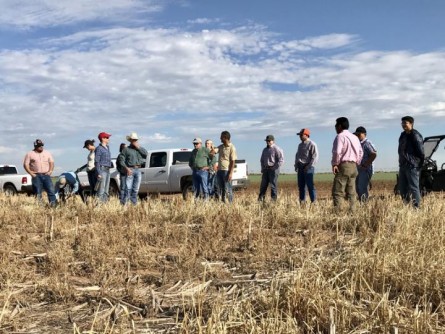 Rajan Ghimire describing the benefits of cover crops and residue cover to subsequent crops in the rotation and soil health to farmers and local stakeholders. 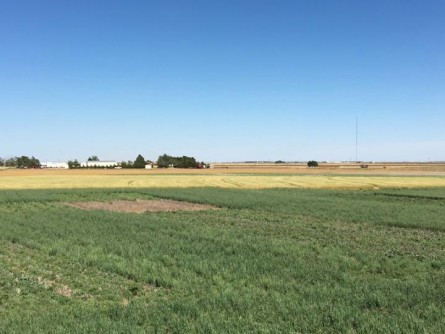 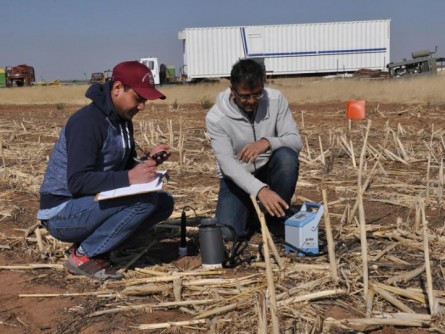 Newswise — March 4, 2020 – The Southern High Plains of the United States have low annual rainfall. When it does rain, though, intense storms can cause severe soil erosion. Strong winds also strip away valuable topsoil.

Usually grown during seasons when primary crops aren’t cultivated, cover crops can include legumes such as pea and hairy vetch, or grassy crops like oats and barley.

Cover crops do more than just cover fields between growing seasons. They help soils retain rainwater and reduce erosion from wind and water.

In a new study, researchers from New Mexico State University and the United States Department of Agriculture show that cover crops can increase soil health in a semi-arid region of New Mexico.

“There was a lot of skepticism on the effectiveness of cover cropping in the hot, dry environment of the southern High Plains,” says Rajan Ghimire. Ghimire is a researcher at New Mexico State University.

“Our research shows that cover crops increased the biological health of soils in the study area within two years,” says Ghimire.

Soil microbes are tiny creatures that live and breathe in healthy soil.  Carbon dioxide is released from soils during plant root and soil microbial respiration. “The higher the biological activity is in soils, the greater the carbon dioxide emissions,” says Ghimire.

The plots were located in Clovis, New Mexico – about 200 miles east of Albuquerque. Ghimire and colleagues tested a variety of cover crops over two growing seasons. They also tested combinations of cover crops, such as growing peas and oats together.

Plots with peas alone, and a combination of peas and canola, showed the highest soil carbon dioxide emissions during one of the study years. However, the emissions trend was not consistent in the second year, making results difficult to interpret.

The researchers showed that the interaction of soil temperature and rainfall play a major role in determining how much carbon dioxide is emitted. Therefore, those factors influence soil health.

Cover crops increase soil carbon storage in two ways. First, their root and aboveground biomass are largely made of carbon, which will eventually decompose into soil organic matter.

They also provide housing and food for the soil microbes. These microbes, especially fungi, are associated with even more carbon storage.

Microbes living in the roots of legumes can fix atmospheric nitrogen to make it available to crops. However, this activity can also increase soil carbon dioxide emissions when legumes are grown as cover crops.

Grassy cover crops, such as oat and barley, contribute well to soil carbon accumulation without the extra emissions from fixing nitrogen. But that means plants will need to get nitrogen elsewhere, and these grasses also tend to need more water than legumes.

The researchers plan to continue this experiment as a long-term study.

“Cover crops are a great way to sequester carbon, reduce global warming and increase agricultural resilience,” says Ghimire. “But there is still a lot to learn about cover cropping, especially in semi-arid environments.”

Learn more about this research in Agrosystems, Geosciences & Environment. Funding for this work was provided by New Mexico State University Agricultural Experiment Station and United States Department of Agriculture – National Institute of Food and Agriculture.