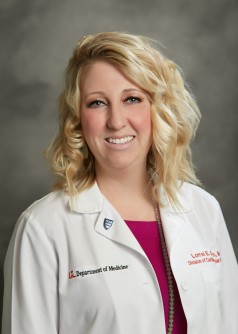 Lorrel Brown, M.D., has won the 2016 Young Investigator Award in Cardiovascular Health Outcomes and Population Genetics from the American College of Cardiology.

In Dr. Lorrel E. Brown’s case, that place was the Kentucky State Fair – and the nation’s premier cardiology association has presented her an award for her innovative thinking.

Brown, assistant professor of medicine in UofL’s Division of Cardiovascular Medicine, won first place in the category of “Young Investigator Awards in Cardiovascular Health Outcomes and Population Genetics” from the American College of Cardiology earlier this month. The award was presented at the organization’s 65th Annual Scientific Session in Chicago. It also was published in the April 5 issue of the Journal of the American College of Cardiology.

Titled “CPR at the State Fair: A 10-minute Training Session is Effective in Teaching Bystander CPR to Members of At-risk Communities,” the research effort brought CPR training to the Kentucky State Fair’s Health Pavilion in August 2015.

Nearly 400,000 people in the United States have out-of-hospital cardiac arrest each year, she said, or nearly 40 people every hour. Only one in 10 survives.

“The vast majority of people who suffer cardiac arrest don’t experience it in a well-equipped hospital with highly trained medical staff,” Brown said. “They experience it as they go about their daily lives, and just 30 percent of cardiac arrest victims receive CPR, usually from bystanders. Yet we know that bystander CPR dramatically improves chances for survival.”

The group created a 10-minute training module that uses a short video and hands-on coaching to teach people the basics of hands-only CPR. To further determine their mastery of CPR, participants completed a post-training survey and were asked to return to the training site at the fair one hour after training to re-test their CPR ability.

The state fair location also provided an additional benefit: the ability to reach people from communities and counties throughout Kentucky with low rates of bystander CPR.

Since the 2015 fair, Brown has led efforts to conduct bystander CPR training at other locations. “Through the Take It to the Heart tour with KentuckyOne Health, we provided this training in hospital lobbies throughout the state, at UofL women's and men's basketball games and even at the Capitol in Frankfort with the Kentucky Senate,” she said. “Through these efforts, we have trained more than 1,000 individuals in CPR and educated another 43,000. We hope that these efforts not only raise the rates of bystander CPR and survival from cardiac arrest in our own communities, but also serve as a model for other communities.”

Brown will bring the training back to the Kentucky State Fair again this year. “These results suggest that by providing brief trainings in public venues, such as the state fair, we can effectively train people and potentially improve the rate of bystander CPR in this country,” she said.

Organizations or businesses also can schedule their own bystander CPR training session via the Start The Heart Foundation, for which Brown serves as a board member, by calling 502-852-1837.