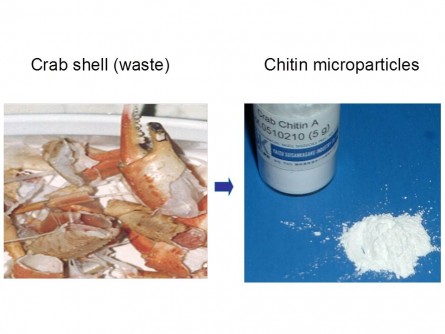 Researchers at FAU and their colleagues have developed an oral form of microparticles in crab and other crustacean shells as a dietary supplement that may prevent and treat IBD and other inflammatory diseases.

Newswise — Yoshimi Shibata, Ph.D., professor of biomedical science in the Charles E. Schmidt College of Medicine at Florida Atlantic University, has received a $380,552 grant from the National Institute of Complementary and Alternative Medicine of the National Institutes of Health (NIH) to further investigate how microparticles called “chitin” found in crab, shrimp and lobster shells have anti-inflammatory mechanisms that could lead to the development of novel preventive and therapeutic strategies for individuals who suffer from inflammatory bowel disease (IBD) and others diseases.

Current medications for IBD include antibiotics, corticosteroids and other biologic anti-inflammatory drugs that are costly and don’t always work. Since lobster, crab and shrimp shells are a major waste in the seafood industry, chitin is abundant and low-cost to prepare. Chitin microparticles are also non-toxic, biodegradable and non-allergenic, and therefore safe for oral ingestion as a dietary food supplement.

Shibata’s collaborators are Zhongwei Li, Ph.D. in FAU’s Charles E. Schmidt College of Medicine; C. Kathleen Dorey, Ph.D. at Virginia Tech Carilion School of Medicine; and Emiko Mizoguchi, M.D., Ph.D., with the Center for the Study of Inflammatory Bowel Disease, Massachusetts General Hospital, Harvard Medical School. Shibata is an immunologist whose research focuses on macrophages, which are multifunctional cells that are essential for the host protective immune systems and inflammation.

Many scientists now believe that most — or perhaps all — chronic diseases stem from chronic inflammation, which plays a direct role in diseases such as IBD, diabetes, cardiovascular disease, cancer, asthma and many other diseases.

Crab, shrimp and lobster shells contain carbohydrates, calcium and protein. Shibata and his colleagues designed the active carbohydrates in these crustaceans by removing the calcium and protein and making small particles with the carbohydrates that are similar to bacteria, called mimetic microbes. They have developed an oral form of this substance as a dietary supplement. The team has demonstrated that oral administration of chitin microparticles reduces disease conditions of allergic asthma, food allergies, colitis and food borne infections in animal models and seasonal allergies in humans. They have also conducted additional studies to advance their understanding of the mechanisms underlying the effects of chitin microparticles on macrophage activation.

“In this new study, we are going to focus on intestinal macrophages and how these mimetic microbes we have developed can produce anti-inflammatory activities, normalize the gut bacterial flora and ultimately improve the symptoms associated with inflammatory bowel disease,” said Shibata.

According to the Crohn’s & Colitis Foundation of America, more than 1.4 million Americans suffer from Crohn’s disease and ulcerative colitis, and approximately 70,000 new cases of IBD are diagnosed each year. Children under the age of 18 are the fastest growing population of IBD patients.

“The causes of inflammatory bowel disease and the factors that influence its activity are not known,” said David J. Bjorkman, M.D., M.S.P.H., a gastroenterologist and dean and executive director of medical affairs for FAU’s Charles E. Schmidt College of Medicine. “The impact of this condition can range from mild to severe debilitation.”

“The important research that Dr. Shibata and his colleagues are conducting will also engage our graduate and undergraduate students in clinically-relevant immunology research, encourage their scientific development, and give them a deeper appreciation of complementary and alternative medicines,” said John W. Newcomer, M.D., executive vice dean of FAU’s Charles E. Schmidt College of Medicine and interim vice president for research at FAU.