Newswise — ALBUQUERQUE, N.M. — Imagine a hurricane similar in magnitude to 2017’s Maria that pummels through islands and small communities, stripping out power lines and wreaking havoc on residents’ lives. Only imagine this time around there is a local power system that is more resilient and can withstand the storm, having the potential to always have power available to communities reeling in devastation.

That is one of the goals of a Cooperative Research and Development Agreement between Sandia National Laboratories and Emera Technologies, which is part of Emera Inc., an energy and services company headquartered in Canada. The 18-month CRADA was signed in July.

Sandia and Emera Technologies are working on microgrids, small-scale versions of interconnected electric grids that locally manage energy storage and resources, such as solar, wind and thermal systems, that may connect to a larger host grid. One of the many advantages of microgrids is they can provide clean, independent and more resilient power generation and storage.

“Alternating current microgrids are increasingly being used throughout the world, but a large and growing portion of generation, storage and electricity use in homes is DC, requiring a conversion from AC to DC to make everything work,” Emera Technologies CEO Rob Bennett said. “In the future, I feel all the unnecessary conversion will go away and DC power systems or microgrids will form a large part of the country’s energy needs.”

DC microgrids still face some technology gaps, but Sandia researchers have been studying control and stability of DC microgrids for military applications, hoping to optimize design and performance at a lower cost, Ellis said.

Sandia toolsets and capabilities that can be applied to DC microgrid research include:

“There are demonstrated vulnerabilities with the grid in the United States and elsewhere. Large scale outages that have recently impacted the electricity supply for entire islands are very good examples of the type of problems we need to prevent or mitigate for the safety and security of our country. With this CRADA we’re trying to address what the future of energy is going to look like,” said Sandia program manager Amy Halloran.

“The way we operate power systems around the world today is based on technology that, for the most part, is a hundred years old,” Bennett said. “Power electronics and other technologies make it possible to move energy around in ways that are now much more efficient. It’s safer, cleaner, more economical, more reliable and more resilient.”

Bennett said he envisions microgrids serving communities at the edge of the grid and portions of the existing grid being turned into microgrids. Eventually the need for central generation systems will diminish and instead, communities will function using their own microgrids.

“Having access to clean and reliable energy everywhere at all times is a good thing, but it’s also a challenge,” Ellis said. “Opting for a DC solution requires a bit of imagination. We’ve been working on pieces of this technology for a long time, and we welcome the opportunity to bring this together.” 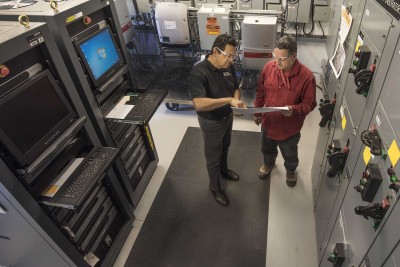 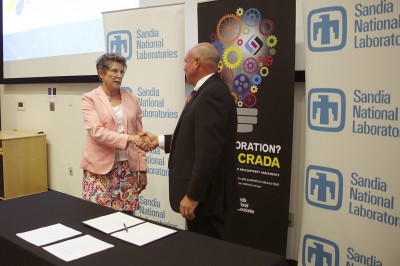