5-Feb-2019 8:05 AM EST, by University of Florida Institute of Food and Agricultural Sciences
favorite_border 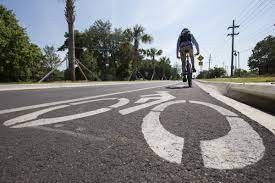 Planners can use this data, for example, to analyze if and how road infrastructure improvements, such as adding a new bike lane or closing a road lane, affect bicycle use, said Henry Hochmair, an associate professor of geomatics at the UF/IFAS Fort Lauderdale Research and Education Center.

GAINESVILLE, Fla. --- Crowd-sourced data can tell us where bicyclists travel, a useful tool for traffic planners as they decide where to build roads and bike paths, new University of Florida research shows.

The research from the UF Institute of Food and Agricultural Sciences focused on using Strava, a GPS-based app, to analyze bicycling patterns in Miami-Dade County, Florida.

Nationally, most bicycle commutes take 10 to 14 minutes, according to 2014 Census Bureau data on bike commuting. Commuting time is at least one factor that affects how many ride their bicycles to work or other activities, researchers say. The bicycle commuter rate in Miami-Dade County is 1 percent -- among the lower rates among U.S. cities. Other cities range from 0.2 percent to 21.1 percent, said Henry Hochmair, the UF/IFAS faculty member who led the new study.

Using Strava, researchers with UF/IFAS found several important bicycle-riding patterns in Miami-Dade. Included among those were:

“The study also demonstrates that people who use mobile devices can contribute to a useful large-scale data collection of cycling patterns for urban and transportation planners, besides the fun factor that comes with logging, reviewing and sharing one’s trips,” said Hochmair, a UF/IFAS associate professor of geomatics.

Similar to Google, which largely derives information about traffic jams from Android phones and hence helps car drivers optimize their trips when they use the traffic layer on Google Maps to avoid traffic jams, the cycling community hopefully can also benefit from this crowd-sourced data collection on mobile devices through better-informed decisions from policy makers and planners.

“In our digitally connected world, where large parts of the population carry a GPS-enabled mobile device, humans became living sensors who collect spatial data on a continuing basis,” said Hochmair, a faculty member at the UF/IFAS Fort Lauderdale Research and Education Center.

Data from bicycle-tracking apps, like Strava or Endomondo, capture travel patterns from a large user base and allow planners to observe how people traverse all roads of a network, and how their behavior changes over time or on certain days, Hochmair said.

Planners can use this data, for example, to analyze if and how road infrastructure improvements, such as adding a new bike lane or closing a road lane, affect bicycle use, he said. Such data can also be used in combination with stationary bicycle counters, which capture all activities, but only at a few locations over a limited time.

Traffic planners, especially those in South Florida, can use the information from the new UF/IFAS study – and data derived from Strava -- to find out more about the nature of trips taken by cyclists, said Hochmair, a faculty member with the UF/IFAS School of Forest Resources and Conservation.

While the information researchers gathered by Strava is interesting, Hochmair cautions that Strava apps are normally used by younger men with higher incomes.

“I would expect similar results in other cities as it regards to certain types of road trips, but the data would have to be tested and verified in separate studies,” he said.

The new UF/IFAS study is published in the Journal of Transport Geography.