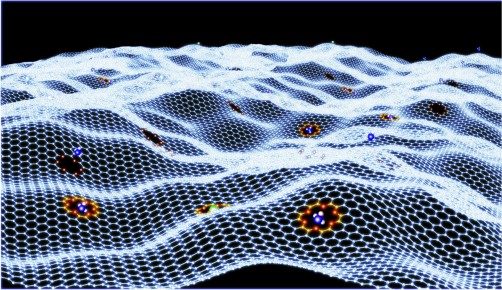 This sheet of graphene contains an array of crown ethers that can strongly bind select guest ions or molecules.

Newswise — Ethers—simple organic molecules in which an oxygen atom bridges two carbon atoms—are the chemical building blocks of commonplace products including many solvents, propellants, cosmetics and pharmaceuticals. Link them together in large molecular rings and they become scientific royalty—crown ether molecules, whose development led in large part to the 1987 Nobel Prize in chemistry. These crown-shaped rings are important as the initial prototype in host–guest chemistry, a field in which “guest” ions and molecules can be captured within the cavity of a “host” molecule. This capability allows chemists to organize a collection of separately weak bonding interactions, such as the electrostatic bond between an ether oxygen atom and a metal ion, to achieve strong, selective binding. This useful property, called “molecular recognition,” is employed for separations, sensing and catalysis.

Now a team led by the Department of Energy’s Oak Ridge National Laboratory has discovered a way to dramatically increase the selectivity and binding strength of crown ethers. The researchers have incorporated them within a rigid framework of graphene—ultra strong and light one-atom-thick carbon that is a big deal in its own right (it was the subject of the 2010 Nobel Prize in physics).

“We’re the first ones to see crown ethers in graphene,” said Matthew Chisholm, who leads the Scanning Transmission Electron Microscopy Group in ORNL’s Materials Science and Technology Division and focuses on characterizing materials. “Our calculations based on these observations indicate unprecedented selectivity and binding strength.”

Incorporating crown ethers into graphene, which is a stiff sheet due to the honeycomb arrangement of its carbon atoms, forces the ether rings to lie flat. The result is rigid holes that optimize selectivity for atoms of sizes that best fit ring cavities. Moreover, constraining the crowns in two dimensions forces all their oxygen dipoles to point inward, toward the centers of cavities, optimizing the electrostatic potential for binding atoms. For example, the strength with which a crown ether binds a potassium atom is three times greater in its constrained, rigid state on graphene than in an unconstrained structure.

Molecular recognitionThe size and shape of the cavity formed within a crown ether molecule confers selectivity for complementary ions and small molecules that fit it, like a lock and key. Crown ethers come in different sizes, so they can accommodate ions of different diameters. In a crown ether, the electric dipole moments of the C–O–C ether groups when organized around a captured guest metal ion provide a large electrostatic potential for binding the ion in the ring cavity. The host can then transport the guest to places it normally could not go, such as through cell membranes. The fact that only the guest ion can be so transported makes crown ethers especially useful in science and technology.

Scientists have studied the concerted electrostatic binding of crown ether hosts to their ionic guests for 50 years. Because the molecular recognition properties of crown ethers mimic the selective molecular transport properties of biological proteins, a new understanding of pharmaceutical function has become possible with exciting medicinal applications. In industrial technology, host–guest chemistry can be used on the small scale for analysis of trace ions in aqueous streams and on the large scale to remove contaminants (e.g., radioactive cesium) from wastes. Because crown ethers are selective, they are now used for metal separations and have already helped clean up millions of gallons of legacy nuclear waste.

But a problem has prevented crown ethers from realizing their full potential in this and other applications: Traditional crown ethers are extremely flexible. They twist and untwist constantly—millions of times each second in solution. Because of the flexibility, a crown ether molecule can adjust the size and shape of its cavity to accommodate a range of sizes and shapes of guests, limiting the crown ether’s selectivity. Despite their flexibility, crown ethers surprisingly cannot adopt an optimal shape to bind guest ions, limiting the strength of their binding. Their oxygen atoms point in a three-dimensional zigzag pattern in which the C–O–C dipoles do not point directly at the guest, resulting in far weaker binding than is often desired.

The graphene crown ethers’ new flattened, rigid state means they have no flexibility. “Their perfect rigidity is something we almost never see in molecular systems, especially among the traditional crown ethers,” said Bruce Moyer, leader of ORNL’s Chemical Separations Group. “The oxygens are held in place. There is no way graphene is going to twist. Traditional crown ethers have dipoles that do not point directly at the metal, but the dipoles of the crown ethers in graphene point directly at the guest ion. Graphene thus gives you both enhanced selectivity and enhanced binding for metal ions that fit the crown ether cavity.”

Added Moyer, “Such selectively enhanced binding allows you to do much more challenging separations in principle.” One example might be mining lithium, an element important in batteries for electric vehicles, from sea water, where it is present in low concentrations.

Such industrial applications would require scaling up production of the graphene crown ethers. Initial research would require moles, an amount of crown ethers equivalent to the number of atoms in 12 grams of carbon-12 (i.e., Avogadro’s number, or 6.023 x 1023).

Building a better atom trapORNL researchers used a chemical approach to produce graphene. Cristian Contescu and Nidia Gallego started with graphite, oxidized it to form graphene oxide and then reduced that to form graphene. Because reduction never gets rid of all the oxygen, the oxygen that remains must be very strongly bonded to carbon atoms. When oxygens and carbons alternate around the rim of a hole in the graphene, crown ethers form in the rigid material.

Chisholm and Junjie Guo, a former postdoctoral researcher at ORNL, used scanning transmission electron microscopy and electron energy loss spectroscopy to reveal the atomic positions, local composition and local electronic properties in the oxidized graphene. Moyer, who shared expertise on crown ethers, said he “can hardly wait till we can demonstrate the unprecedented selectivity of the graphene crown ethers in extracting metal ions from solution.”

ORNL’s Jaekwang Lee, at Vanderbilt University during the study, and Sokrates Pantelides, who holds joint appointments at Vanderbilt and ORNL, used the VASP program on a supercomputer at the National Energy Research Scientific Computing Center (a DOE Office of Science User Facility at Lawrence Berkeley National Laboratory) to perform density-functional theory calculations of graphene sheets functionalized by crown ethers. The calculations revealed the binding properties of planar crown ethers.

The team will continue to explore the behavior of rigid crown ethers. “We’re starting from ground zero,” Chisholm said. “We have seen these crown ether structures in graphene oxide, and now we have to show that they can be made and used.”

Future challenges include reproducibly making holes of uniform size (Chisholm has done this with an electron beam, but the approach is too time-consuming to work at large scale) and isolating and specifically placing single atoms in structures.