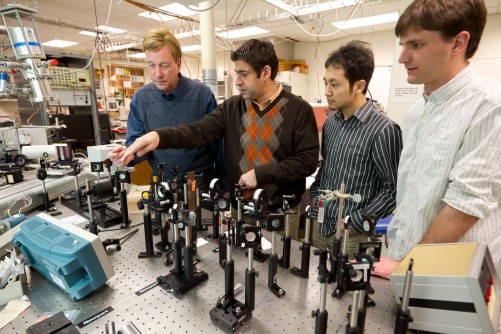 Newswise — WINSTON-SALEM, N.C. – July 15, 2011 – Using a crystal ball to protect homeland security might seem far-fetched, but researchers at Wake Forest University and Fisk University have partnered to develop crystals that can be used to detect nuclear threats, radioactive material or chemical bombs more accurately and affordably.

The research is made possible by a $900,000 grant from the Office of Nuclear Nonproliferation Research and Development of the National Nuclear Security Administration, within the U.S. Department of Energy. The grant will support both universities’ continued research in the area of radiation detection, which ultimately could lead to improved detector devices for screening cargo containers at ports, airports and border crossings. It would detect trace amounts of radioactive or chemical material – similar to a CT scan or PET scan detecting a tumor in the human body – and lead to better medical diagnostics.

“This grant is an acknowledgement of Fisk and Wake Forest’s excellence and leadership in the field of radiation detection research,” said Fisk University Professor of Physics and Vice Provost Arnold Burger.

Researchers at Fisk and in national laboratories previously discovered that strontium iodide crystals doped with europium are able to detect and analyze radiation better than most other detection materials. Wake Forest researchers recently demonstrated the unexpectedly crucial role of specific parameters – electron and hole mobilities – needed to predict the best energy resolution of a given detector crystal.

Currently, expense is an issue because of the large quantities of the crystalline material ultimately needed for widely deployed screening devices. However, strontium iodide already performs much better than the most affordable detectors currently used, and the scientists are optimistic that with the right calculations and adjustments, crystals of the needed quality and size can be grown and produced affordably.

“Unexpected radiation situations are a fact of our modern world,” said Dr. Richard Williams, Professor of Physics at Wake Forest. “By improving radiation detection and diagnostics, our research will benefit medical advancement as well as international security.”

Founded in 1834, Wake Forest is one of the nation’s most respected universities, recognized for its outstanding academic reputation and challenging liberal arts curriculum. Wake Forest is ranked 25th among national universities by U.S. News and World Report. Founded in 1866, Fisk is Nashville’s first university. According to the National Science Foundation, Fisk produces more African Americans who go on to earn PhDs in the natural sciences than any school in the nation.