Newswise — Like a team of forensic detectives in a television show that could be called "CSI: Milky Way," a University of Chicago astrophysicist and his associates are piecing together how a mysterious infrared ring got left around a dead star that displays a magnetic field trillions of times more intense than Earth's.

NASA's Spitzer Space Telescope detected the ring around magnetar SGR 1900+14 at two narrow infrared frequencies in 2005 and 2007. The ringed magnetar is of a type called a soft gamma repeater (SGR) because it repeatedly emits bursts of gamma rays.

"The universe is a big place, and weird things can happen," said Stephanie Wachter of NASA's Spitzer Science Center at the California Institute of Technology. "I was flipping through archived Spitzer data of the object, and that's when I noticed it was surrounded by a ring we'd never seen before."

Wachter enlisted Vikram Dwarkadas, a Senior Research Associate in Astronomy & Astrophysics at the University of Chicago, to help determine how the ring formed. Wachter, Dwarkadas and five other co-authors present the results of their investigation in the May 29 issue of the journal Nature.

"It's the first time something like this has ever been seen around a magnetar," Dwarkadas said. Magnetars come from massive stars that have exploded as a core-collapse supernova. "These stars are at least eight times the mass of the sun, or more massive than that," he said.

Magnetars interest astrophysicists because of their mysterious and unusual characteristics. When massive stars collapse, they usually form compact objects called neutron stars or black holes. "We have no idea why some neutron stars are magnetars and some are not," Dwarkadas said.

When Wachter's team began pondering the origin of the ring, "We thought initially of all the standard explanations," Dwarkadas said. But the team considered and eliminated several possibilities before concluding that a powerful flare that burst from the magnetar formed the ring, which measures seven light-years across.

"It's as if the magnetar became a huge flaming torch and obliterated the dust around it, creating a massive cavity," said co-author Chryssa Kouveliotou, senior astrophysicist at NASA's Marshall Space Flight Center in Alabama. "Then the stars nearby lit up a ring of fire around the dead star, marking it for eternity."

Was the ring an infrared echo, a mass of dust lit up by a flare moving out from the magnetar? The 2007 Spitzer image showed no discernable change in the ring after two years. "If it hasn't moved, it hasn't changed, it can't be an infrared echo," Dwarkadas said. "It's a stationary ring."

Could the ring be a bubble blown by solar winds emitted from the star before it exploded? Shock waves of a supernova travel at approximately 10,000 miles a second. If the ring was a wind-blown bubble, the supernova shock wave would overtake it somewhere between a few decades to a century or two, at most.

"It would mean that the supernova should have actually gone through and destroyed the ring unless it was very, very recent," Dwarkadas said. If the ring was a wind-blown bubble that somehow survived the supernova shock wave, "then you'd need a massive bubble," he said. "We did some calculations and we ran some simulations, and it just didn't work."

Wachter's team next considered whether the ring could be related to the supernova. That possibility also failed to pan out. "If there is a supernova, there would be shocks. You would see X-ray, radio and optical emission. We looked at archival data, and there was no emission at any wavelength except in the Spitzer images," Dwarkadas said.

The paper's other co-authors are Jonathan Granot of the University of Hertfordshire, England; Enrico Ramirez-Ruiz of the University of California, Santa Cruz; Sandy Patel of the Optical Sciences Corporation, Huntsville, Ala.; and Don Figer at the Rochester Institute of Technology in New York. 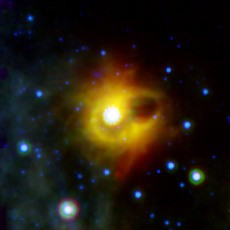 Caption: This image shows a ghostly ring extending seven light-years across around the corpse of a massive star. The collapsed star, called a magnetar, is located at the exact center of this image. NASA's Spitzer Space Telescope imaged the mysterious ring around magnetar SGR 1900 14 in infrared light. The magnetar itself is not visible in this image, as it has not been detected at infrared wavelengths (it has been seen in X-ray light). 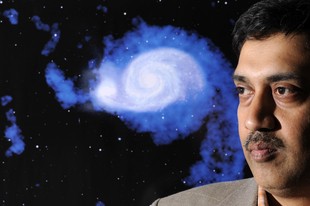 Caption: Vikram Dwarkadas, Senior Research Associate in Astronomy & Astrophysics at the University of Chicago. Along with colleagues at NASA and elsewhere, Dwarkadas has been studying a strange ring circling a dead star.