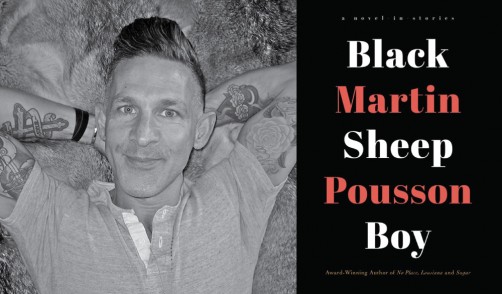 CSU Northridge professor Martin Pousson's book, "Black Sheep Boy," has been named a National Endowment for the Arts Fellowship Winner, a Los Angeles Times Literary Pick and an NPR: The Reading Life Featured Book, among other accolades. He is also the author of "Sugar," a book of poetry, and "No Place, Louisiana," a finalist for the John Gardner Book Award.

Newswise — Martin Pousson had been teaching English literature and creative writing at CSU Northridge for a decade when he learned that he'd won one of the most prestigious awards in literature for his "novel in stories," "Black Sheep Boy" (Rare Bird Books).

Given by the PEN Center USA, Pousson will receive the award at a ceremony in Beverly Hills on October 27. "I am thrilled to receive the award from PEN," says Pousson. "I have long respected the foundation as the defenders they are of queers — not just queers who identify as such by sexual orientation, but in attitude: journalists who have dared, dissenters, protesters, outsiders who are jailed or persecuted in various ways."

We asked Pousson about his novel and its narrator, Boo, as well as his background growing up Acadiana, the Cajun bayou land of Louisiana, and what teaching at the CSU has brought to his writing.

Q: I read that your book is a "fabulist" novel. Fabulism seems to have something in common with magical realism. What is fabulism, exactly?

Pousson: First, isn't "fabulism" just fun to say? Second, it's a meaningless category or it's as meaningful as all categories. As any Cajun from the bayous of Louisiana knows, a good gumbo is a good gumbo, whether it's seafood or chicken & sausage. Good storytelling is good storytelling; it knows no category.

Yet publishers, editors, booksellers, and scholars like to use categories, so fabulism is understood by some as a way of describing magic realism that has travelled north of the Rio Grande. This misunderstanding extends a colonial view of fiction south of the border as exotic or unreal.

Q: I read about your book that it deals with "defending a queer identity that is both personally and socially queer." What does it mean to be socially queer?

Pousson: Those who identify as queer do so not only because of sexual preference or sexual practice but also because of a social attitude and appearance. Queers reject assimilation and conformity, just as they resist authority and hierarchy. Queers question; queers challenge.

In "Black Sheep Boy," the coming-of-age story becomes queer as the 13 stories in the novel center not on Boo, the narrator, but on a revolving cast of renegades and radicals. Boo doesn't find redemption in marriage or in assimilation or in family acceptance. Instead, he takes inspiration from outsiders and misfits and defies conformity and the social order.

Q: Why did you decide to write "Black Sheep Boy" as a series of interlocking stories?

But now "Black Sheep Boy" has 13 stories and 13 letters in its title and took 13 years to write, and 13 is a magic number in Acadiana. If you want to keep a loup-garou (a werewolf) from entering your home, then place 13 stones outside the door. Why? Because a loup-garou can only count to 12. And if that's not a fabulist story, then nothing is.

Pousson: She's both holy and a ghost, in that she practices faith with fire. She's a tent revival evangelist singer, and she's the daughter of a voodoo traiteur with an inherited power that can harm and heal with the same hand, just as some Cajuns venerate the Virgin Mary and practice voodoo at the same time in the same room.

The mother's song in "Black Sheep Boy" is a zydeco song, a song written for mixed-race people snapping green beans ("les haricots verts") on the front porch together. Separately, the instruments they play are humble, an overturned tin tub or a tin washboard, but together they make a holy sound.

Q: The setting of your book, in the bayous of Louisiana, is all-important to the stories. It's also where you grew up. What are some words or phrases that come to mind that evoke this land for you?

Pousson: "Laches pas la potate." Though others think of "laissez les bon temps rouler" ("let the good times roll") when they think of Southern Louisiana, Cajuns know that joy is meaningless unless it follows suffering. "Laches pas la potate" translates literally to "don't let go the potato," but its meaning is not literal but figurative.

Cajuns were and often still are extremely poor farmers, bayou dwellers, and victims of the largest mass exile in the Western Hemisphere and one of the largest land grabs in USA history.

When you only have a potato left, you don't despair, you don't throw the potato out the window, you don't eat it, no, you hold onto it, for it'll sprout, it'll grow. Who knows what will come of your potato if you only stay true to you?

The potato is the grit of Acadiana, the Cajun bayou land of Louisiana. First Cajuns endure the suffering, then they let the good times roll.

Q: How might the PEN Center USA Literary Award influence your teaching at CSUN?

Pousson: I love teaching at CSUN because it's exactly the kind of space where the best stories arise. It's the most diverse campus I've taught at — Chicana/o, Latina/o, Korean, Filipino, African-American, Armenian — and groups of various faiths, Islamic, Jewish, and Hindu religions. Students also come from a broad range of economic classes. When they all sit in the same classroom, there's a vitality, a charge of creativity. It's not a master narrative, it's not a monolithic story. It's a place of intersections and crossroads wherein we all learn from each other.

The stories in "Black Sheep Boy" developed in part because of my teaching at CSUN. In a series of experimental fiction courses, I set out to investigate new forms and genres and discovered the power when writers bend forms and cross genres. My new stories came directly out of teaching students in those courses.

Getting this literary award will further enable me to connect students to more professional opportunities. Students from my classes have been published widely. They've graduated and gone on to work as editors and journalists and academics, and some of that happened because students attend not only my classes but also public readings. There, I introduce them to other writers and to academics at area graduate programs.

Winning this PEN award shows students that you don't need to conform or compromise your personal identity; you can assert an identity that is other, culturally, sexually, religiously, and you can assert a writing style that also isn't conformist or conventional.

You can write stories in an infinite variety of ways and still launch them out into the world.

To learn more about Martin Pousson's writing, go to martinpousson.com.