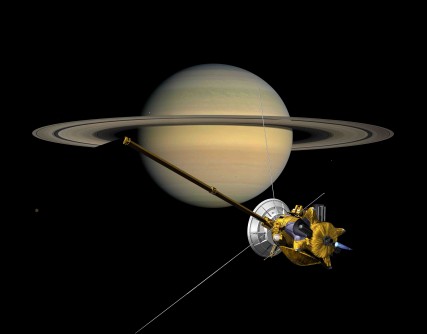 Newswise — Sept. 13, 2017—University of Colorado Boulder Professor Larry Esposito has been eying the fabulous rings of Saturn for much of his career, beginning as a team scientist on NASA’s Pioneer 11 mission when he discovered the planet’s faint F ring in 1979.

He followed that up with observations of Jupiter’s and Saturn’s rings from the Voyager and Galileo spacecraft, which carried instruments designed and built at CU Boulder. Now, as the principal investigator on CU Boulder’s $12 million Ultraviolet Imaging Spectrograph (UVIS) on the Cassini-Huygens mission to Saturn, Esposito and his Cassini colleagues are feeling a bit somber: After 13 years in orbit the spacecraft has run out of fuel and will disintegrate in Saturn’s dense atmosphere early on the morning of Sept. 15.

“September 15th will be a bittersweet ending to a mission that has fascinated us as scientists and enthralled the public with images and new findings for many years,” said said Esposito of CU Boulder’s Laboratory for Atmospheric and Space Physics (LASP).

The UVIS instrument suite, a set of telescopes used to measure ultraviolet light from the Saturn system, has been used to study the structure and evolution of Saturn's rings; the chemistry, clouds and energy balance of Saturn and Titan; and the surfaces and atmospheres of some of Saturn's 62 known moons, said Esposito.

Many discoveries by Esposito and his UVIS team involve Saturn’s rings—made up of ice, rocks and moonlets as large as Mount Everest—the age of which have been debated for decades. Esposito, who used observations from the Voyager mission to compare the rings of Saturn, Jupiter and Neptune, believes Saturn’s rings may be as old as the solar system, which is believed to have formed some 4.6 billion years ago.

“When the two Voyager spacecraft passed by Saturn in 1980 and 1981, we thought the rings were relatively young,” Esposito said. “But data from Cassini are consistent with the picture that Saturn has had rings throughout its history.

“We see extensive, rapid recycling of ring material in which moons are continually shattered into ring particles, which then gather and reform moons.”

Esposito likened the ever-changing rings at Saturn to construction in Beijing, China, where marble from structures erected during the Ming Dynasty (1368—644) is being recycled to build new structures today.

“The same sort of thing is happening with Saturn’s rings,” Esposito said. “They are renewed continually, so the rings themselves can be ancient, but the structures we see today are just part of their current manifestation. We have even watched the rings changing over the course of this mission.”

The UVIS instrument will be turned on during Cassini’s final dive into Saturn’s data and will be routing data to Earth until the mission is over, said Esposito, one of many mission scientists who are gathered at NASA’s Jet Propulsion Laboratory (JPL) in Pasadena, California, for Cassini’s grand finale.

The Cassini-Huygens mission is a cooperative project of NASA, the European Space Agency and the Italian Space Agency. JPL, a division of Caltech, manages the mission for NASA's Science Mission Directorate, Washington. JPL designed, developed and assembled the Cassini orbiter.

CU Boulder is the only university in the world to have designed and built instruments that have visited every planet in the solar system, plus Pluto.