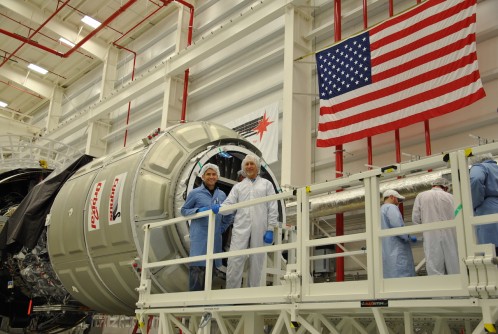 Researchers stand in front of a BioServe module.

Newswise — Bacterial cells treated with a common antibiotic in the near-weightlessness of the International Space Station (ISS) responded with some clever shapeshifting that likely helped them survive, findings with implications for both astronauts and people on Earth.

Researchers from the University of Colorado Boulder’s BioServe Space Technologies designed an experiment to culture the common E. coli bacteria on ISS and treat it with several different concentrations of the antibiotic gentamicin sulfate, a drug that kills them on Earth. The response of the cultured bacteria included a 13-fold increase in cell numbers and a 73 percent reduction in cell volume size compared to an Earth control group, said BioServe Research Associate Luis Zea, lead study author.

“We knew bacteria behave differently in space and that it takes higher concentrations of antibiotics to kill them,” said Zea. “What’s new is that we conducted a systematic analysis of the changing physical appearance of the bacteria during the experiments.”

Because there are no gravity-driven forces in space like buoyancy and sedimentation, the only way the ISS bacteria can ingest nutrients or drugs is through natural diffusion, said Zea. The large decrease of the bacteria cell surface in space also decreases the rate of molecule-cell interaction, which may have implications for more effectively treating astronauts with bacterial infections in space.

The new study also showed the bacterial cell envelope – essentially its cell wall and outer membrane – became thicker, likely protecting the bacteria even more from the antibiotic, said Zea. The E. coli bacteria grown in space also tended to form in clumps, perhaps a defensive maneuver of sorts that may involve a shell of outer cells protecting the inner cells from antibiotics, said Zea.

In addition, some of the E. coli cells also produced outer membrane vesicles – small capsules that form outside the cell walls and act as messengers for cells to communicate with each other, Zea said. When cells with such vesicles reach a critical mass they can synch up to initiate the infection process.

“Both the increase in cell envelope thickness and in the outer membrane vesicles may be indicative of drug resistance mechanisms being activated in the spaceflight samples,” said Zea. “And this experiment and others like it give us the opportunity to better understand how bacteria become resistant to antibiotics here on Earth.”

“The low gravity of space provides a unique test bed for developing new techniques, products and processes that can benefit not only astronauts, but also people on Earth,” said Stodieck, a research professor in the Ann and H.J. Smead Aerospace Engineering Sciences. “In space, for example, scientists can learn more about biochemical changes in various cells and organisms that the force of gravity on Earth may be masking.”

The clumping of E. coli bacterial cells may be related to biofilm formation – multicellular communities held together by a self-produced matrix. Examples of biofilms on Earth include the scum on vinyl shower curtains, dental plaque and even collections of bacteria that can adhere to silicon in medical devices like catheters. Biofilms also can form on various surfaces of space vehicles, said Zea, making them a potential health threat to space travelers.