Eleven months after devastating fire, 50-year-old theatre springs back to life with new tech, enhanced seating and acoustics and reinvigorated students and faculty

After being closed for 11 months after an accidental fire, UWM's Mainstage Theatre will re-open to the public on March 7, 2018, with a production of the drama "12 Ophelias." 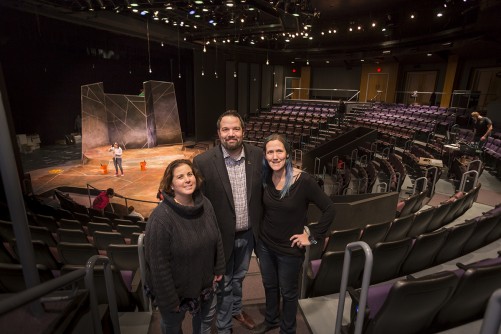 Peck School of the Arts administrators (left to right) Jessica Berlin Krivsky, Randy Trumbull-Holper and Lisa Dickson too just two days to reschedule more than 180 classes for 1,600 students in UWM's Peck School of the Arts after an accidental fire damaged the school's music, art and Mainstage Theatre buildings last spring. Then it was time to oversee renovations in the 50-year-old Mainstage Theatre, which reopens to the public March 7.

Newswise — MILWAUKEE __ The Mainstage Theatre at UWM’s Peck School of the Arts will re-open to the public on Wednesday, March 7, 11 months after a fire ripped through the theater’s scene shop, causing nearly $6 million in damages to an aging building that has been a hub of activity and art for UWM theater and dance students since 1967.

No one was injured in the fire on April 8, 2017, but nearly 200 classes, performances, exhibitions and the final performance of the 2016-17 Mainstage Theatre season were rescheduled and relocated in the immediate aftermath. Smoke and water from the building’s fire suppression system destroyed the theater’s 488 seats, scene shop and lighting system, in addition to significant damage to backstage and below-stage areas and the adjoining Art and Music buildings.

“In the days after the fire, we would see students walking by the theater building start crying: ‘My project is on the third floor of the art building,’ or ‘How can we perform our final show in a few days?’” Emmons said. “There was a lot of emotional trauma in those early days, and then students figured out that the UWM campus community and local arts community were coming together to make their experience complete. It bonded them as students and artists.”

In the week after the fire, 180 professionals from Paul Davis Restoration moved through the buildings to discard destroyed items and triage costumes and other equipment badly damaged by smoke. The Milwaukee Repertory Theater hosted the final production of the season, “Arcadia.” Shorewood High School welcomed the department’s stagecraft professors and students who needed a place to build sets before the show opened.

Once the building was cleared for renovations, and spring performances and graduation had concluded, Peck faculty and staff pursued a renovation plan that Emmons said was affordable but also responsive to the changing needs of students and audience members.

“Creative problem-solving and teamwork are hallmarks of an arts education,” said Emmons. “People in the school worked many many hours to define what the renovated facility should look like, maximize replacement dollars for new lighting and improved sound and fix other problems of the building that pre-dated the fire.” Improvements and accommodations The $5 million insurance-funded renovations and theater upgrades include:

** New ceilings in the art and theatre buildings

** A new CNC router (computer-controlled cutting machine) with safety enhancements so that aspiring and experienced stagehands can design and build sets.

Appearances matter, too. The original theater’s oak paneling, 90-degree angles, yellow décor and blue seats reflected sound back to the stage and were the height of interior design – circa 1967. While charming, the old seats were noisy, too small for modern bodies and not in compliance with the Americans with Disabilities Act.

“It was a moral imperative that we make this space available to patrons and students who use wheelchairs and other adaptive equipment,” said Emmons, who noted that the school’s administration agreed to pay for the ADA accommodations out of the school’s budget.

“Sometimes, it takes a catastrophe for advancement to occur,” added LeRoy Stoner, the chair and longest serving member of the Theatre Department. “Our students are getting a whole new level of tools and technology to work with, and our building is now wheelchair accessible and more comfortable for all patrons.”

Recognized as one of the nation’s 115 top research universities, UW-Milwaukee provides a world-class education to 25,000 students from 91 countries on a budget of $653 million. Its 14 schools and colleges include Wisconsin’s only schools of architecture, freshwater sciences and public health, and it is a leading educator of nurses and teachers. UW-Milwaukee partners with leading companies to conduct joint research, offer student internships and serve as an economic engine for southeastern Wisconsin. The Princeton Review named UW-Milwaukee a 2018 “Best Midwestern” university based on overall academic excellence and student reviews, and the Sierra Club has recognized it as Wisconsin’s leading sustainable university.