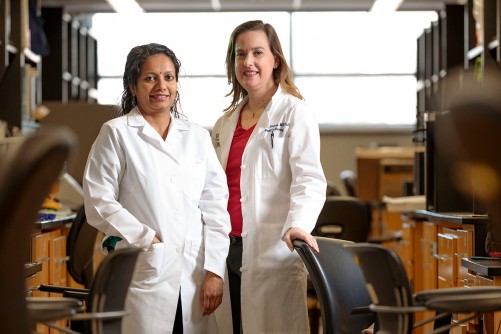 Newswise — Cancer therapies have improved — in some cases dramatically — over the past two decades, but treatment for cervical cancer has remained largely unchanged. All patients receive radiation and chemotherapy, yet despite the aggressive approach, the regimen fails in about one-third of patients with cervical cancer that has spread beyond the cervix but not outside the pelvis.

Now, researchers at Washington University School of Medicine in St. Louis have shown that cervical tumors that don’t respond to radiation may be vulnerable to therapies that also attack the cancer’s fuel supply. Studying mice implanted with human cervical cancer cells, the investigators wiped out many of the animals’ tumors with a combination of radiation and three drugs that target tumor metabolism. They chose drugs that cut off the cancer’s ability to burn glucose and shut down protective processes that help cancer cells survive.

The study is published online in the journal Cancer Research.

“Cancer cell metabolism is a little bit peculiar,” said senior author Julie K. Schwarz, MD, PhD, an associate professor of radiation oncology. “Tumor cells take up glucose faster and in higher amounts than normal tissues. In past imaging studies, my colleagues and I noticed that cervical tumors that took up a lot of glucose prior to radiation treatment tended to be more resistant to radiation therapy than other tumors. If consuming a lot of sugar makes them resistant, we wondered what happens if we inhibit their sugar uptake.”

Schwarz and her colleagues used three different drugs, alone and in combination, to deprive cervical tumors of glucose and block downstream metabolic pathways that help protect cancer cells from building up toxic free radicals. Two of the drugs are investigational and approved by the Food and Drug Administration (FDA) for use in people as part of clinical trials; the third drug is FDA-approved to treat rheumatoid arthritis.

The researchers tested the drug combinations against four different human cervical cancer cell lines. One of the cell lines was vulnerable to being cut off from glucose alone, but the others needed more interference. All four cancer cell lines responded significantly to radiation plus the three-drug combination. One cell line was wiped out entirely. Schwarz and her team noted that the mice did not show obvious negative side effects of this therapy, likely because healthy cells don’t rely on one fuel production pathway.

When Schwarz and her colleagues cut off glucose, they force a cancer cell to scavenge for an alternative fuel. With the tumor in this vulnerable state, the researchers strike again by shutting down the cell’s ability to mitigate the toxic stew it creates from its own deranged metabolism. The treatment essentially forces the cell to drown in its own toxicity, according to the researchers.

“In many cases, when you cut off glucose alone, the cancer cells find ways to compensate,” said first author Ramachandran Rashmi, PhD, a staff scientist in radiation oncology. “But if you then hit their metabolic pathways in two more ways at the same time, the cell can’t recover from that. The stress from the toxic free radicals will escalate, eventually overwhelming the cell.”

Schwarz said that historically, cervical cancer is difficult to study in the lab because most cases are caused by human papillomavirus (HPV), and there is no equivalent infection in mice.

“Ninety to 95 percent of cervical cancer cases are HPV-related, and there are very few studies of this type of cancer in mice because HPV is a human virus,” Schwarz said. “It’s very difficult to produce a mouse model of a solid tumor of the type we see in most women who are diagnosed with cervical cancer. Even though this is a relatively rare cancer, we know HPV is important in a number of other tumors, including those of the head and neck. We believe what we learn from studying cervical cancer will help improve treatments for any HPV-driven cancer.”