Cutting Through the Clutter: Study Examines 'Dark Side of Home' 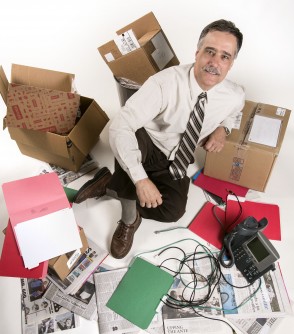 Joseph Ferrari, a professor of psychology at DePaul University in Chicago co-authored a study which looked at how an overabundance of possessions can create a chaotic and disorderly living space. “It’s the danger of clutter, the totality of one’s possessions being so overwhelming that it chips away at your well-being, relationships, and more, drowning in a sea of stuff,” Ferrari said.

Newswise — CHICAGO — The phrase “make yourself at home” seems innocuous but there is a significant psychological element to it that few may consider. The concept implies that a conscious effort must be employed in the endeavor. For some it’s as easy as good people in a good location. But according to a recent study, the most common method of “making oneself at home” is by identifying with the objects that are kept in the home — and that kind of attachment can have significant consequences if left unchecked.

“Basically, what this study found was that on the macro level, there is an attachment to our place, but on the micro level, it’s our possessions that we identify with,” said Joseph Ferrari, a professor of psychology at DePaul University in Chicago. He is a co-author, along with Catherine Roster and M. Peter Jurkat from the University of New Mexico’s Anderson School of Management, of “The Dark Side of Home: Assessing Possession ‘Clutter’ on Subjective Well-being,” which was published in the June 2016 issue of the Journal of Environmental Psychology (http://bit.ly/TDSOH).

Ferrari noted that this study is believed to be the first of its kind to look at how clutter — defined as “an overabundance of possessions that collectively create chaotic and disorderly living spaces” — can impact mental health. The research investigated a “dark side of home,” which is created when the quality of home is compromised by clutter.

According to Ferrari, there is a danger to identifying strongly with possessions, which can disrupt one’s life where it hurts the most: a sense of home.

“It’s the danger of clutter, the totality of one’s possessions being so overwhelming that it chips away at your well-being, relationships, and more, drowning in a sea of stuff,” he said.

The concept of psychological home is universal, said Ferrari, but what most people don’t realize is that feeling “at home” isn’t intrinsically tied to one’s living space. “Whenever we’re together, that’s my home,” he crooned. “That’s a song from my generation. Whenever you’re with somebody, you might feel ‘at home’ with them. It doesn’t necessarily have to be a physical place.”

While there’s no harm in a few trinkets or a manageable collection, Ferrari warned that when attachment to our possessions becomes overwhelming, then they are not just harmless stuff; as a mass, it’s clutter.

“It’s when it interrupts your life, when it takes priority over your relationships and responsibilities that you need to do something,” he said. “And, that’s the problem with clutter. It can disturb your sense of home and ability to bond with others.”

The goal of the study was to analyze the link between the psychological home and place attachment as it relates to possessions, in particular the way that clutter specifically disturbs one’s sense of home.

The population surveyed included adults age 18 and older who were residents of the U.S. or Canada and had mild to severe issues with clutter. They were clients of the Institute for Challenging Disorganization, a nonprofit based in St. Louis whose mission is to benefit people challenged by chronic disorganization.

The participants completed an in-depth survey about place attachment, assessing objective factors like size of living space and demographic information, but also subjective variables like happiness and personal well-being. The study received just under 1,400 viable responses, composed largely of women, with a median age of 54 and income between $50,000 and $75,000. Just over half of the subjects were married, and 78 percent were homeowners.

Studying nebulous, intangible concepts like “home” posed several challenges, according to Kendall Crum, a doctoral student in DePaul’s community psychology program who assisted with the mining of data. She explained that while collecting data, they had to find the best possible objective measure for psychological home. It’s not like taking a temperature where one can use a single tool and receive a clear reading. It’s a subjective feeling that can only be quantified through thorough, systematic analysis, Crum acknowledged.

“Every individual has their own experience, so trying to make something that makes sense for everyone and make it in a way that’s easily explained became challenging,” said Crum. “Are we talking about the expression of your self-identity, or the benefits you get from doing that? Do you get safety and security from imparting yourself on your things that are around you, and are you getting your sense of self from that?”

‘The dark side of home’

Clutter is distinct from hoarding, said Ferrari. While hoarding is usually an excess of one object, clutter is the overwhelming sum of any number of different objects, he explained, adding that it can overwhelm a victim mentally by becoming such a distraction and preoccupation that they can’t focus, or physically when the sheer space taken up by clutter becomes an obstacle in their daily life.

“When we have too many possessions, they can become clutter, and we’ve shown that that has an impact on home,” Ferrari said. “Clutter gets in the way of relationships. Things, not people, become what matters in life, but relationships are what provide us with a sense of community. We identify with our possessions, but when home is plagued by clutter, it gets corrupted in a very harmful way. Most people think of home positively, but we’re showing the negative side, the dark side.”

The authors noted that while the sample helped identify individuals with clutter issues, “the sample cannot be regarded as representative of the general population of either the U.S. or Canada.” Instead, they noted that it is “more accurate to say that the sample is representative of individuals who seek the help of professional organizers” … and suggests that the survey respondents had at least “some level or recognition that clutter was posing an issue in their lives.”

The next steps in the research will be to look at the demographic data, which lends itself to uncountable possibilities, according to Crum. “You could spend your life researching all of these populations and subgroups to try and find out, what other things impact this? How does it impact other groups?” she said.

This research on well-being revealed a clear link between clutter and a feeling of home, but when kept in check, curating certain possessions provides a healthy outlet for self-expression, according to Ferrari, who keeps a collection himself. “Something about lighthouses appeals a lot to me. The whole wall in my office has lighthouse figures,” he said. “Manageability, practicality, and the healthiness of the attachment is what separates personal collections from harmful clutter.”

Ferrari is occasionally seen on the motivational speaker circuit sharing his research with the general public. “What drew me to this is, seriously, is the ability to help people,” said Ferrari. “I really want the public to understand what’s going on.”