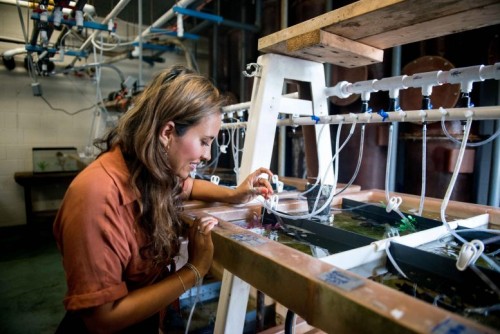 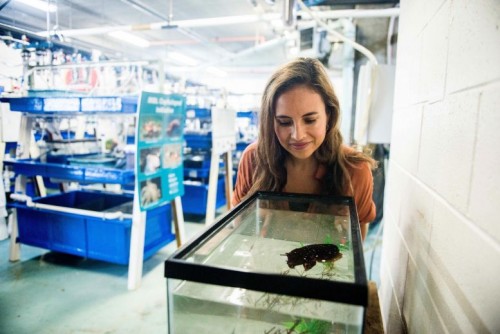 Alex Schnell with a cuttlefish tank at the Marine Biological Laboratory, Woods Hole, Mass., where this experimental work was conducted. 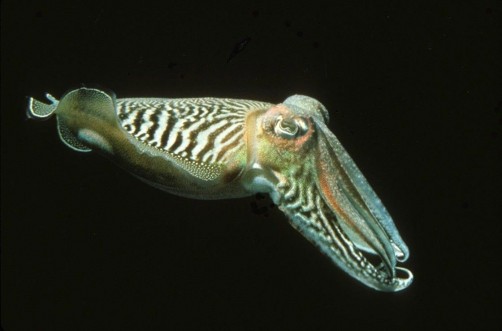 Newswise — WOODS HOLE, Mass. --Cuttlefish can remember what, where, and when specific events happened - right up to their last few days of life, researchers have found. The results, published this week in the journal Proceedings of the Royal Society B, are the first evidence of an animal whose memory of specific events does not deteriorate with age.

“Cuttlefish can remember what they ate, where and when, and use this to guide their feeding decisions in the future. What’s surprising is that they don’t lose this ability with age, despite showing other signs of ageing such as loss of muscle function and appetite,” said first author Alexandra Schnell of the University of Cambridge’s Department of Psychology, who conducted the experiments at the Marine Biological Laboratory in collaboration with MBL Senior Scientist Roger Hanlon.

As humans age, they gradually lose the ability to remember experiences that happened at particular times and places – for example, what we had for dinner last Tuesday. This is termed episodic memory, and its decline is thought to be due to deterioration of a part of the brain called the hippocampus.

Cuttlefish do not have a hippocampus, and their brain structure is dramatically different to ours. The vertical lobe of the cuttlefish brain is associated with learning and memory. This does not deteriorate until the last two to three days of the animal’s life, which the researchers say could explain why episodic-like memory is not affected by age in cuttlefish.

To conduct the experiment, the cuttlefish were first trained to approach a specific location in their tank marked with a black and white flag. Then they were trained to learn that two foods they commonly eat – grass shrimp, which they prefer, and king prawn -- were available at specific flag-marked locations and after specific delays. This training was repeated daily for four weeks.

Then the cuttlefishes’ recall of which food would be available, where, and when was tested. To make sure they hadn’t just learned a pattern, the two feeding locations were unique each day. All the cuttlefish - regardless of age - watched which food first appeared at each flag and used that to work out which feeding spot was best at each subsequent mealtime.

“The old cuttlefish were just as good as the younger ones in the memory task – in fact, many of the older ones did better in the test phase. We speculate that this ability might help cuttlefish in the wild to remember who they mated with, so they don’t go back to the same partner; such behaviors might promote gene spreading throughout the regional population,” said Schnell.

Hanlon added, “We have studied cuttlefish extensively in the field and laboratory for decades, but these sophisticated behaviors are a surprise even to us. There are many discoveries still to come in the link between brain and behavior.”

Cuttlefish have short lifespans – most live until around two years old – making them a good subject to test whether memory declines with age. Since it is impossible to test whether animals are consciously remembering things, the authors used the term ‘episodic-like memory’ to refer to the ability of cuttlefish to remember what, where and when specific things happened.

This research was funded by the Royal Society and the Grass Foundation. Schnell was a Grass Fellow in residence at the Marine Biological Laboratory when the experiments were conducted.

By Jacqueline Garget, University of Cambridge

Proceedings of the Royal Society B Biological Sciences