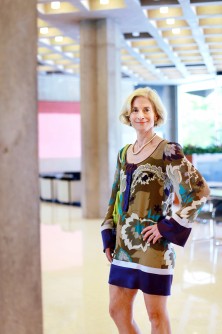 Newswise — CLEVELAND—The Inamori International Center for Ethics and Excellence at Case Western Reserve University has selected Martha C. Nussbaum, who The New York Times once described as “the most prominent female philosopher in America,” for the 2015 Inamori Ethics Prize.

Case Western Reserve has awarded the Inamori Ethics Prize annually since 2008 to honor an individual for significant and lasting contributions to ethical leadership on the global stage.

Among her many groundbreaking initiatives, Nussbaum, the Ernst Freund Distinguished Service Professor of Law and Ethics at the University of Chicago, countered the prevailing theory among economists that a nation’s social, economic and political progress is best measured by gross national product (GNP).

Alternatively, she advocates for using a “capabilities approach” to judge a society’s quality of life. The theory, which the United Nations adopted, is based on a universal set of human values, such as the right to life, health, recreation, political freedom and the right to own property.

“Martha's brilliant ‘capabilities approach’ has transformed the global conversation about human rights and what it means to treat other humans ethically,” said Inamori Center Director Shannon E. French, acting chair of the Department of Philosophy. “This approach looks at what each individual is actually capable of being and doing and gives practical direction for seeking justice and positive change for those who cannot access opportunities or enjoy the basic freedoms they need to flourish and unlock their potential.”

In addition, Nussbaum has written extensively and spoken publicly about the need to preserve and encourage study of the humanities. (French and Case Western Reserve faculty members Jeremy Bendik-Keymer, the Elmer G. Beamer-Hubert H. Schneider Professor in Ethics, and Peter E. Knox, the Eric and Jane Nord Family Professor and Director of the Baker-Nord Center for the Humanities, incidentally, all studied under Nussbaum.)

The Inamori Center presents the Inamori Ethics Prize Ceremony as part of its mission to foster ethical leadership. Nussbaum will receive the award during ceremonies Oct. 15-16 at Case Western Reserve, including a free public academic symposium that explores the theoretical and practical ramifications of the recipient's work, achievements and areas of interest.

In Nussbaum’s case, her interests and expertise are wide-ranging, which The New York Times profile described: “Nussbaum has discussed Greek tragedy with Bill Moyers on PBS, presented Plato on the Discovery Channel and been photographed by Annie Leibovitz…More important, as a regular contributor to The New York Review of Books and The New Republic, Nussbaum's essays have become required reading for those with a taste for intellectual combat.”

The Inamori Center was endowed by a generous gift from Kazuo Inamori, who established Kyocera Corp. and is a global telecommunications leader, and founder of the Inamori Foundation that presents the annual Kyoto Prize in Kyoto, Japan.

Nussbaum has associate appointments in the departments of Classics and Political Science, and with the Divinity School, and is a member of the Committee of South Asian Studies and a board member of the Human Rights Program.

Educated at New York and Harvard universities, Nussbaum previously taught at Harvard, Brown and Oxford. She was the first woman to hold the Junior Fellowship at Harvard, and has been repeatedly ranked among the world’s top intellectuals by prestigious organizations and publications. She has received honorary degrees from 50 colleges and universities in the United States, Canada, Latin America, Asia, Africa and Europe.

Nussbaum has written several books, including The Fragility of Goodness: Luck and Ethics in Greek Tragedy and Philosophy (1986), Hiding From Humanity: Disgust, Shame, and the Law (2004), Frontiers of Justice: Disability, Nationality, Species Membership (2006), Not For Profit: Why Democracy Needs the Humanities (2012), and Political Emotions: Why Love Matters to Justice (2013). ### Case Western Reserve University is one of the country’s leading private research institutions. Located in Cleveland, we offer a unique combination of forward-thinking educational opportunities in an inspiring cultural setting. Our leading-edge faculty engage in teaching and research in a collaborative, hands-on environment. Our nationally recognized programs include arts and sciences, dental medicine, engineering, law, management, medicine, nursing and social work. About 4,200 undergraduate and 5,600 graduate students comprise our student body. Visit case.edu to see how Case Western Reserve thinks beyond the possible.