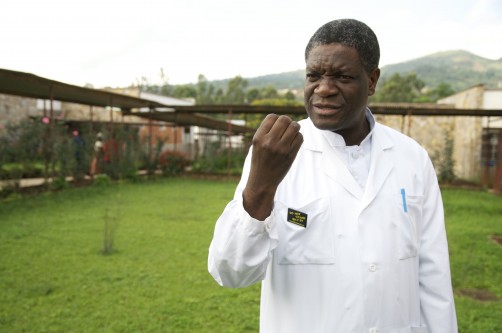 Newswise — CLEVELAND, OHIO—When Dr. Denis Mukwege was growing up in what is now the Democratic Republic of Congo (DRC), he would accompany his father, a Pentecostal minister, on visits to comfort sick people in his community.

The desire to heal those for whom his father prayed inspired a life’s devotion to do the same through medicine.

Mukwege, 59, a deeply committed physician and human rights activist, has worked tirelessly with and for women who have suffered excruciatingly traumatic and violent attacks in the name of war.

The Panzi Hospital, which he founded in Bukavu, Congo (the war-torn region of the DRC) and where he serves as manager and chief surgeon, is known worldwide for its treatment of women with severe gynecological problems, mostly from sexual violence.

Panzi has become a beacon of hope for thousands of women. Patients who can’t afford care are treated for free. He has persisted in his mission, despite attacks on his life. As a result, he and his colleagues have treated more than 40,000 rape survivors.

For a life’s commitment to such important humanitarian efforts, the Inamori International Center for Ethics and Excellence at Case Western Reserve University in Cleveland, Ohio, (USA) has selected Mukwege for the 2014 Inamori Prize for Ethics, awarded annually since 2008 to honor an individual for significant and lasting contributions to ethical leadership on the global stage. The Inamori Center presents the Inamori Ethics Prize Ceremony as part of its mission to foster ethical leadership. Mukwege is scheduled to receive the award during ceremonies at the Case Western Reserve campus on Oct. 1. The prize event will be free and open to the public and will take place in the newly built Tinkham Veale University Center.

“Dr. Mukwege is a man of great courage and integrity,” said Inamori Center Director Shannon E. French. “The problems he addresses evoke such feelings of horror that most people avoid even thinking of them. Dr. Mukwege has helped women all over the world by refusing to turn away and demanding instead that the world confront the issue of sexual violence. He shows compassion and respect for human dignity by both treating and empowering women.”

Mukwege, who has long been an outspoken international advocate for gender equality and women’s rights, has been recognized by many organizations and institutions for both his medical knowledge and commitment to ending sexual violence in the DRC, including twice being nominated for the Nobel Peace Prize (in 2009 and 2013).

“The perpetrators of these crimes destroy life at its entry point,” he once said. “The women can no longer have children. Often they get infected with AIDS and will spread the disease. Their men are humiliated. So the perpetrators destroy the entire social fabric of their enemies, their communities, their future generations, without even killing the woman. A line has been crossed here, which should have been an absolute taboo.”

In addition to medical support, the Panzi Hospital also provides patients with psychological counseling and legal advice. Mukwege also founded the Panzi Foundation, which works with victims of sexual violence by providing legal assistance, counseling and training on many topics.

The Inamori Center was endowed by a generous gift from Dr. Kazuo Inamori, who established Kyocera Corp. and is a global telecommunications leader and founder of the Inamori Foundation that presents the annual Kyoto Prize in Kyoto, Japan.

Case Western Reserve University is one of the country’s leading private research institutions. Located in Cleveland, we offer a unique combination of forward-thinking educational opportunities in an inspiring cultural setting. Our leading-edge faculty engage in teaching and research in a collaborative, hands-on environment. Our nationally recognized programs include arts and sciences, dental medicine, engineering, law, management, medicine, nursing and social work. About 4,200 undergraduate and 5,600 graduate students comprise our student body. Visit case.edu to see how Case Western Reserve thinks beyond the possible.