Cybersecurity Student Researches How to Keep Cars Safe From Hacking 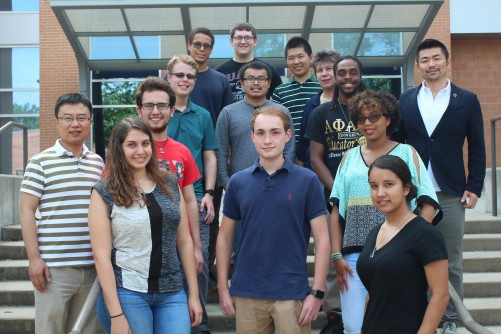 Newswise — In 2015, two researchers remotely hacked a Jeep Cherokee being driven by a reporter who documented how the researchers controlled everything from the car’s radio and media console to its brakes and steering.

For Dr. Shucheng Yu, an associate professor of computer science at the University of Arkansas at Little Rock, the exercise demonstrated how vulnerable smart cars with GPS, Bluetooth, and internet connections are to cyberattacks.

“These cars have become the trend of the future,” Yu said. “There could be some very severe consequences if someone hacked into the car. A car can be fully controlled by the hacker if it is not protected.”

So Yu and his student, Zachary King, a junior majoring in computer science at UALR, spent the summer researching how to keep cars safe from cyberattacks. They worked on the project during an intensive eight-week summer research program at UALR.

King was one of 10 college students from across the country recruited through a National Science Foundation grant-funded project, “REU Site: [email protected]: Cyber Security and Forensics Research at the University of Arkansas at Little Rock.”

The goal of the program is to decrease cyberattacks on people using mobile technology and social networking sites, said Dr. Mengjun Xie, an associate professor of computer science and director of the [email protected] program.

“The basic idea is to integrate cybersecurity and cyber forensics research with the latest technology in mobile cloud computing and social media to provide research opportunities to students,” Xie said.

More than 130 students applied for 10 spots. Participants included undergraduate college students with a grade point average of 3.0 or higher who are majoring in computer science, computer engineering, math, physics, or electrical engineering

Those selected spent eight weeks conducting research full time with a faculty mentor at the University of Arkansas at Little Rock. Participants received a $4,000 stipend, on-campus housing, a meal plan, and travel expenses.

How to protect your smart car

The research focuses on the development of a security protocol to protect the Controller Area Network (CAN), an internal communications system in vehicles.

“There are many ways that hackers can control CAN,” King said. “Once they access it, hackers can pretty easily control your car however they want. We are proposing to add a layer of security, so if an unauthorized person accesses it, they still wouldn’t be able to control your vehicle.”

The second security feature protects against replay attacks, when a hacker attempts to breach the network by repeatedly sending an old message. The protocol uses a timestamp to calculate when the network last received the message, which verifies the message’s “freshness.”

Yu and King are continuing their research this fall. In the future, Yu hopes to collaborate with industry and funding agencies to implement the security protocol in commercial vehicles and protect cars from hackers.

As for King, participating in this summer research program has left him considering a career in cybersecurity once he graduates in 2018.

“Three months ago, I wouldn’t have been able to tell you much about cybersecurity and what a security protocol would look like,” he said. “After having completed this program, I am more interested in cybersecurity than I was before, and I may end up going that route.”

A summer of innovative research

The [email protected] participants were honored during a commencement ceremony July 29 at the UALR Engineering and Information Technology Building.

Their research topics range from utilizing cybersecurity and social network forensics to understanding cyber warfare to the use of facial emotion recognition for security purposes.