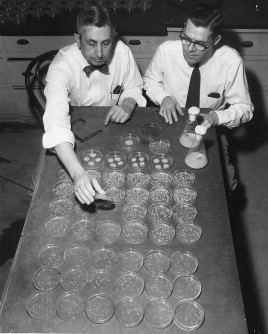 Newswise — MADISON — Seventy-three years ago Tuesday, on June 6, 1944, the D-Day invasion of Normandy was bolstered by millions of doses of a precious new substance: penicillin.

On the other side of the Atlantic, researchers at the University of Wisconsin–Madison and other institutions had spent the last three years pursuing advances in penicillin production. Though discovered 16 years prior, the world’s first natural antibiotic was expensive and difficult to wring from the mold that makes it. By discovering new strains, isolating more productive mutants, and improving growing methods, UW-Madison biologists helped supply Allied troops with enough penicillin to treat life-threatening infections.

More than 50 UW–Madison scientists participated in the government-organized program. Descendants of the penicillium mold developed at UW–Madison are still used to produce penicillin around the world today.

In 1941, two British scientists, Howard Florey and Norman Heatley, came to the United States to enlist government and university researchers in increasing penicillin production. Florey’s team had demonstrated that penicillin could safely treat bacterial infections in animals and humans, but they could barely extract enough of the antibiotic to treat a single patient. In Ken Raper, a bacteriologist at the USDA’s Northern Research Regional Laboratory (NRRL) in Peoria, Illinois, Florey found an able partner.

Raper, who later joined the faculty at UW–Madison after collaborating with his future colleagues throughout the war, was already an experienced mold biologist. His lab at the NRRL had been perfecting fermentation techniques to extract valuable natural compounds from microbes, an expertise well suited to increasing penicillin production. Raper’s experience collecting many different strains of fungi and the social amoebae dictyostelids helped him recognize that better strains of penicillium mold might be found in nature. At the time, only Alexander Fleming’s original mold was known to produce the antibiotic.

In a nationwide search for more productive strains, the best was found growing on a moldy cantaloupe in a Peoria grocery store — strain NRRL-1951. Unlike Fleming’s mold, which only grew on the surface of liquid cultures, NRRL-1951 grew well when mixed throughout the culture. This submerged growth allowed much higher concentrations of the mold, and penicillin, to be produced.

Raper sent NRRL-1951 to collaborators around the country. Researchers at Cold Spring Harbor in New York irradiated the strain with X-rays and sent the resulting mutants to the University of Minnesota, where scientists screened them and forwarded promising candidates on to Wisconsin.

UW–Madison microbiologist Elizabeth McCoy identified the best new mutant, X-1612, which was grown and tested by biochemists William Peterson and Marvin Johnson. Peterson and Johnson oversaw dozens of scientists who tinkered with the mold’s growing conditions to induce more penicillin production. The researchers tested larger fermentation vessels to take advantage of economies of scale. They improved the sterilization, aeration and mixing of the cultures, while perfecting milk- and corn-based culture broths developed in Peoria.

Meanwhile, UW–Madison botanists John Stauffer and Myron Backus took McCoy’s strain and exposed it to ultraviolet light to create more mutations in the mold. Eventually, they isolated Q-176, the most productive penicillium strain of the wartime program.

“And when they got this one breakthrough, it doubled the production in a month,” recalls former UW–Madison Professor of Biochemistry Robert Burris, who was part of the penicillin project, in an oral history from university archives. “You could do it by submerged fermentation, you could do it on cheap media, and the extraction process was worked out by that time so you could get reasonably clean material at a low price and it just was a real boon in the treatment of a variety of diseases and infections.”

According to Raper’s accounts of the work, the descendants of Q-176 are still used to produce the drug today.

“When the English came over here … it was figured out that they were getting about four units per milliliter of penicillin,” says Raper in an archived oral history of his work. “By Christmas of that year in Peoria — when we started in July — we were getting about 40. This mold came off the cantaloupe in its native state produced about 100. By making selections from it we had 250. The X-ray mutant produced 500 and the ultraviolet mutant that they had here in Wisconsin produced 900 so the thing was going up like this, you see. There was great excitement.”

Marcin Filutowicz, a professor of bacteriology at UW–Madison who uses Raper’s dictyostelid collection to search for new antimicrobials, says the story of wartime penicillin research was well-known in his native Poland after the war.

“Production of penicillin was the first major step in the development of industrial microbiology,” says Filutowicz. “This was the first instance of the paradigm that scientists can use their basic understanding of a beneficial organism to improve the metabolic output of compounds that provide social benefits and have commercial value.”

“Antibiotics have saved millions of lives since the discovery of penicillin,” says Filutowicz.

The strains of penicillium mold produced at UW–Madison were not patented, but were given freely to private industry to grow as much as possible for the war effort. Improved techniques were shared widely. By the end of the war, the cost of 100,000 units of penicillin — just a fraction of a single dose — dropped from $20 (about $500 today) to three cents. Whereas Florey struggled to extract enough penicillin to treat a single patient in 1941, before the war was over production was high enough to allow civilian use of the drug.

The antibiotic era that this scientific collaboration among departments, institutions and nations launched continues at UW–Madison to this day, with researchers scouring the world’s insects and marine environments for new compounds while other teams try to discover new ways to combat infectious microbes. The legacy of these historic and ongoing efforts are the countless lives saved by these drugs.