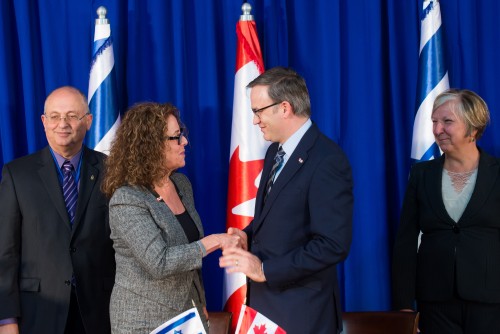 Newswise — Dalhousie and Ben-Gurion University of the Negev (BGU) in Israel have signed a Memorandum of Understanding (MOU) to create a world-class Ocean Studies Centre in Eilat, with Canadian philanthropist Seymour Schulich playing a leading role. Dalhousie President Richard Florizone and BGU President Rivka Carmi signed the agreement today in Israel and in the presence of both Prime Minister Stephen Harper and Prime Minister Benjamin Netanyahu.

"Seymour Schulich, with his masterful vision and generosity, has been the catalyst for what has the potential to become a world-class ocean research centre for Dalhousie University and Ben-Gurion University,” said Dr. Florizone.

“The excellent science done by Marlon Lewis and other Dal ocean researchers, together with Seymour Schulich’s strong support and Martha Crago’s facilitation, has given great momentum and credibility to our partnerships with leading Israeli universities and research institutions."

Opportunities for researchers, graduate students and industry will result from this collaborative partnership with BGU. There will be joint research projects, industry internships and electronic long-distance courses, field courses in each country (the Eilat campus in the winter, Halifax in the Summer), as well as major scientific conferences and workshops.

"I believe we have a duty to give back and I cannot think of a better way to give back than to invest in education,” added Seymour Schulich. “This partnership with Dalhousie University and Ben-Gurion University focused on ocean studies is important to our two countries and to our world. I am very proud to be a part of it."

The goal of the agreement is to position the Ocean Studies Centre as a gathering place for marine scientists from around the world, a generator of basic, applied and industry-partnered scientific advances, and home to an innovative international educational program for the development of highly qualified personnel.

The two different ocean environments of the Red Sea and the North Atlantic provide both complementary and, at the same time, well-aligned settings for major applied and basic scientific discoveries. There are opportunities for discovery in physical oceanography related to the phenomenon of deep water mixing; deep water corals; underwater natural and animal resources; aquaculture and marine biodiversity; marine animal behaviour; and marine sovereignty, marine security and transportation.

The world’s oceans span many international borders and modern marine sciences must take an international approach. This collaboration is an avenue to develop cultural, socio-historical and political understanding among students and scientists from Canada and Israel, as well as their neighbouring countries and those that are further away.

"This initiative owes credit to the Nova Scotia government, who had the foresight to take a group of Nova Scotians to Israel in 2011, and to the former Israeli Minister of Science and Technology, Daniel Hershkowitz, who steered me to visit his country's newly prioritized marine research, including that being done in Eilat, Israel,” explained Martha Crago, Vice-President, Research. “My visit that year gave me the awareness and commitment to build ties with the excellent scientific work in the unique setting of Eilat. It is a place that is important not only for marine science but also for developing improved cultural and socio-political understanding. Dalhousie, with its striking multi-disciplinary strengths in ocean science partnered with the oceanographic, marine biology and aquaculture possibilities of the scientists in Eilat, will advance our understanding of the resources and risks that the global ocean offers to us."

The United Jewish Appeal (UJA) Federation of Greater Toronto has been partnering with the Eilat/Eilot region for over 30 years. Expansion of BGU’s Eilat campus has been a key part of its strategy and as a result, the UJA has been a valuable ally in support of this initiative.

About Dalhousie University:Dalhousie University is the leading Canadian ocean research university, situated on the shores of the North Atlantic Ocean. As one of Canada’s 15 top performing research intensive universities, it has over 100 world famous ocean scientists distributed across a number of faculties and disciplines, and their work connects researchers on five continents. Dalhousie has close ties with five Canadian federal government laboratories and a number of successful ocean technology companies through the Halifax Marine Research Institute.

About Ben-Gurion University:Ben-Gurion University of the Negev aspires to fulfill the vision of Israel's first Prime Minister, David Ben-Gurion, who believed that Israel's future lay in the development of the Negev, a desert area comprising more than sixty per cent of the country. Today, at its campuses in Beer-Sheva, Sede Boqer and Eilat, close to 20,000 students are enrolled in the Faculties of Engineering Sciences, Health Sciences, Natural Sciences, Humanities and Social Sciences and the Guilford Glazer Faculty of Business and Management, the Joyce and Irving Goldman Medical School and the Kreitman School of Advanced Graduate Studies. Major university research institutes include the National Institute for Biotechnology in the Negev, the Jacob Blaustein Institutes for Desert Research with the Albert Katz International School for Desert Studies, the Ilse Katz Institute for Nanoscale Science and Technology and the Ben-Gurion Research Institute for the Study of Israel and Zionism. Repeatedly voted the most popular choice of Israeli undergraduate students, the University is known for its dynamic atmosphere and commitment to excellence in teaching and research.

Ben-Gurion University is a world leader in arid zone research, offering its expertise to many developing countries. In keeping with its mandate, it plays a key role in promoting industry, agriculture and education in the Negev. Thousands of its students take part in community-oriented activities and special tutoring projects. The university welcomes exciting challenges in innovative fields of research and strives to bring new opportunities to Beer-Sheva and the Negev while continuing its pursuit of academic excellence and expanding its contribution to the community.