Dalhousie Builds the Greenest Building in the Land 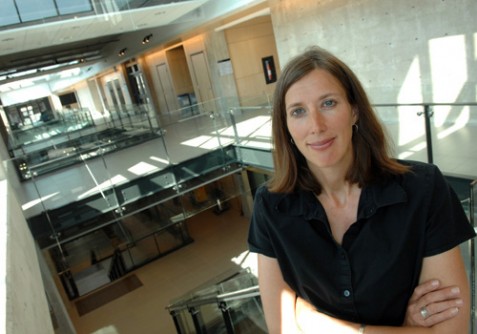 Rochelle Owen and the Mona Campbell Building at Dalhousie University

Newswise — The Mona Campbell Building is the greenest place to go at Dalhousie University. It’s a showpiece of green design, from the urinals in the men’s washroom to bike racks outside and inside the building.

"Dal’s efforts at green building began with the Rowe Building in the 1990s," says Rochelle Owen, director of Dal’s Office of Sustainability. "But here we’re really stepping it up a notch and it’s a part of larger, more cohesive effort."

Besides opening the green building -- the building’s designers are hoping for a gold LEED rating -- other initiatives at Dalhousie include the multi-million retrofit of the outdated Life Sciences Centre, switching from Bunker C oil to natural gas and a major campus lighting retrofit involving more than 50 buildings.

LEED (standing for Leadership in Energy and Environmental Design) is the green building rating system developed to spur green design. LEED certification will also be sought for the other new building being constructed on campus, the Life Science Research Institute or LSRI.

"Exciting times at Dal," says Ms. Owen, as she leads a tour pointing out its energy and water saving features.

Among the green features of the building are:

- bike racks on the perimeter of the building and in the basement- a shower room and lockers for use of cyclists- cistern to collect nonpotable water- organic food selections at Topio’s, a pizza counter on the first floor- 85 heat pumps to recirculate heat from different parts of the building- high-efficiency lighting with sensors that detect when a room is in use or not- FSC-certified maple paneling- "OptiNet" air quality sensors that measure humidity, carbon dioxide and small particles- recycling and organics bins on each floor- low-flo fixtures in the bathrooms- rainwater collected from the roof and gutters is used to flush toilets- "Bubbledeck" technology used, a construction method that uses fewer materials and energy than traditional methods"green" roof, planted with drought-resistant sedum and grassessolar wall, about 200 metres square, to preheat ventilation air

Notably, the Mona Campbell Building is the fitting home for the year-old College of Sustainability.