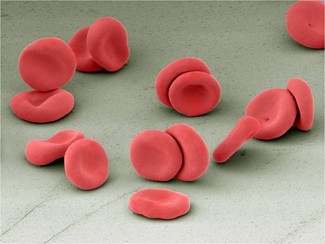 The continuous, necessary production of blood cells, including these red blood cells captured in a scanning micrograph by Thomas Deerinck, is the responsibility of hematopoietic stem cells found in bone marrow.

Newswise — Researchers at the University of California, San Diego School of Medicine report that a protein called beta-catenin plays a critical, and previously unappreciated, role in promoting recovery of stricken hematopoietic stem cells after radiation exposure.

The findings, published in the May 1 issue of Genes and Development, provide a new understanding of how radiation impacts cellular and molecular processes, but perhaps more importantly, they suggest new possibilities for improving hematopoietic stem cell regeneration in the bone marrow following cancer radiation treatment.

Ionizing radiation exposure – accidental or deliberate – can be fatal due to widespread destruction of hematopoietic stem cells, the cells in the bone marrow that give rise to all blood cells. A number of cancer treatments involve irradiating malignancies, essentially destroying all exposed blood cells, followed by transplantation of replacement stem cells to rebuild blood stores. The effectiveness of these treatments depends upon how well the replacement hematopoietic stem cells do their job.

“The Wnt pathway and its key mediator, beta catenin, are critical for embryonic development and establishment of the body plan,” said Reya. “In addition, the Wnt pathway is activated in stem cells from many tissues and is needed for their continued maintenance.”

The researchers found that mice deficient in beta-catenin lacked the ability to activate canonical Wnt signaling and suffered from impaired hematopoietic stem cell regeneration and bone marrow recovery after radiation. Specifically, mouse hematopoietic stem cells without beta-catenin could not suppress the production of oxidative stress molecules that damage cell structures. As a result, they could not recover effectively after radiation or chemotherapy.

“Our work shows that Wnt signaling is important in the mammalian hematopoietic system, and is critical for recovery from chemotherapy and radiation,” Reya said. “While these therapies can be life-saving, they take a heavy toll on the hematopoietic system from which the patient may not always recover.”

The findings have significant clinical implications.

“There are two major reasons why accelerating regeneration is important clinically,” said Reya. “One is that after cancer patients are irradiated and transplanted with stem cells, the rate and extent of recovery is often not sufficient to protect the patient from anemia or infections, which can be difficult to treat and sometimes deadly. Identifying signals that can boost regeneration after the bone marrow is severely damaged may help improve outcomes after transplantation.

“Second, doses of chemotherapy and radiation used to treat cancer are often limited by the collateral damage they cause to normal tissues. Although higher doses might kill more cancer cells more effectively, they can’t be used because they kill normal cells too. If we can improve and accelerate recovery, we might be able to use higher doses of radiation or chemotherapy and reduce the risk of cancer relapse.”

Reya said post-therapy hematopoietic stem cell regeneration could be accelerated by modulating the Wnt pathway, either by delivering additional Wnt proteins directly to patients or through drugs that activate the pathway. Further studies will be needed to determine if these approaches may be clinically useful to mitigate the damage caused by radiation and chemotherapy.