Surgically implanted device could help those with brain injury, Alzheimer’s 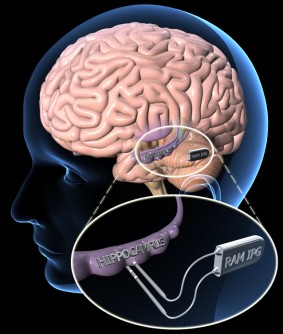 Schematic illustration of the neuromodulation device designed to restore memory to be developed by UCLA RAM team. 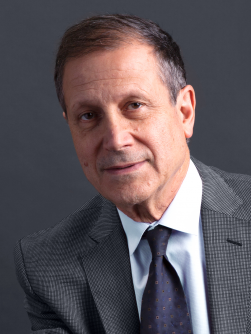 Dr. Itzhak Fried, the lead investigator for the UCLA project and a professor of neurosurgery and psychiatry and biobehavioral sciences at the David Geffen School of Medicine at UCLA and the Semel Institute for Neuroscience and Human Behavior.

Newswise — The UCLA Program in Memory Restoration has been awarded up to $15 million by the Defense Advanced Research Projects Agency (DARPA) for a four -year project aiming to help brain-injured people restore lost memory functions. A UCLA team of experts in neurosurgery, engineering, neurobiology, psychology and physics will collaborate to create, surgically implant, and test a memory prosthesis in the brain.

Memory is the process in which neurons in certain regions of the brain encode information, store it and retrieve it. Certain types of illnesses and injuries disrupt this process and cause memory loss.

“Losing our ability to remember past events and form new memories is one of the most dreaded afflictions of the human condition,” said Dr. Itzhak Fried, the lead investigator for the UCLA project and a professor of neurosurgery and psychiatry and biobehavioral sciences at the David Geffen School of Medicine at UCLA and the Semel Institute for Neuroscience and Human Behavior.

The ambitious, first-if-its-kind project at UCLA builds upon Fried’s 2012 research published in the New England Journal of Medicine in which he demonstrated together with lead author Nanthia Suthana and colleagues that human memory could be supported by stimulating the entorhinal area, a brain region known to be involved in learning, memory and Alzheimer's disease. Considered the entrance to the hippocampus, which helps form and store memories, the entorhinal cortex plays a crucial role in transforming daily experience into lasting memories.

“The entorhinal cortex is the golden gate to the brain's memory mainframe,” Fried said. “Every visual and sensory experience that we eventually commit to memory funnels through that doorway to the hippocampus. Our brain cells send signals through this hub in order to form memories that we can later consciously recall.”

In a key part of the project, the team will stimulate and record activity of single neurons and small neuronal populations in epilepsy patients who are implanted with electrodes as part of their treament for epilepsy. UCLA’s Mayank Mehta, a professor of physics and astronomy and neurobiology, along with Gabriel Kreiman, associate professor at Harvard Medical School, will work with Fried’s research group to develop computational models of how to intervene with sophisticated electrical stimulation to help restore memory function.

These models will be directly applied through transformative technology developed by UCLA Henry Samueli School of Engineering and Applied Science researchers led by Dejan Markovic, an associate professor of electrical engineering. Markovic’s group will work with Lawrence Livermore National Laboratory (LLNL) and Stanford University engineers to develop the electronics embedded in the neuromodulation device.

As part of the project, LLNL will be awarded $2.5 million under a separate cooperative agreement with DARPA to develop an implantable neural device with the ability to record and stimulate neurons within the brain to help restore memory. Markovic said the goal is to create miniature wireless neural sensors that are far more sophisticated than those that exist today. The inductively-charged, wireless sensors will track and modulate neural activity with very precise spatial and temporal resolution which will continuously update and modulate precise patterns of stimulation to optimize therapy and restore memory function.

“We are developing ultralow power electronics in order to measure activity of specific areas of the brain, do neural signal analysis and wirelessly transmit that information to an outside device in close proximity to the implants,” Markovic said. “The implants and the outside device will talk to each other. The goals are to provide better therapy for people with neurological dysfunction and help those with epilepsy and brain injury to enhance and restore memory.”

This system will investigate areas of the brain associated with memory to understand how memories are formed and reduce the effect of memory disorders.

“Currently, there is no effective treatment for memory loss caused by a condition such as traumatic brain injury,” said LLNL’s project leader Satinderpall Pannu, director of the LLNL’s Center for Bioengineering, a facility dedicated to fabricating biocompatible neural interfaces. “This is a tremendous opportunity from DARPA to leverage Lawrence Livermore’s unique capabilities to develop cutting-edge medical devices that will change the health care landscape.”

During the second phase of the program , using minimally invasive surgery, Fried will implant the neuromodulation device into the entorhinal area and hippocampus in patients with traumatic brain injury (TBI) as part of a ground-breaking clinical trial. TBI, which has affected more than 270,000 military service members since 2000, is often associated with debilitating memory loss.

The overarching DARPA program, called Restoring Active Memory, or RAM, supports President Obama’s BRAIN initiative. Under the terms of a cooperative agreement with DARPA, UCLA will receive up to $15 million for its work on the program, with full funding contingent on meeting a series of technical milestones.

“The RAM program poses a formidable challenge reaching across multiple disciplines from basic brain research to medicine, computing and engineering,” Fried said. “But at the end of the day, it is the suffering individual, whether an injured member of the armed forces or a patient with Alzheimer’s disease, who is at the center of our thoughts and efforts.” 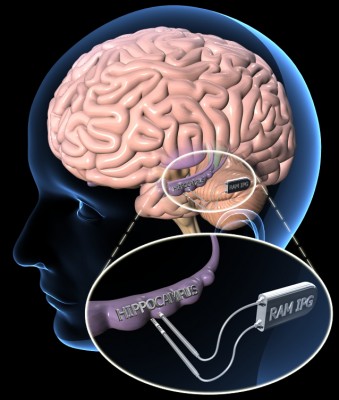 Caption: Schematic illustration of the neuromodulation device designed to restore memory to be developed by UCLA RAM team. 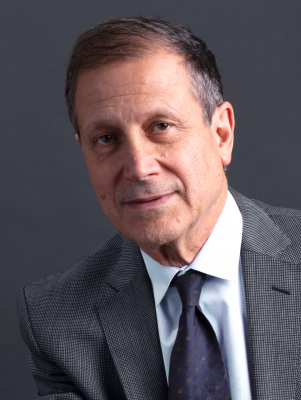 Caption: Dr. Itzhak Fried, the lead investigator for the UCLA project and a professor of neurosurgery and psychiatry and biobehavioral sciences at the David Geffen School of Medicine at UCLA and the Semel Institute for Neuroscience and Human Behavior.