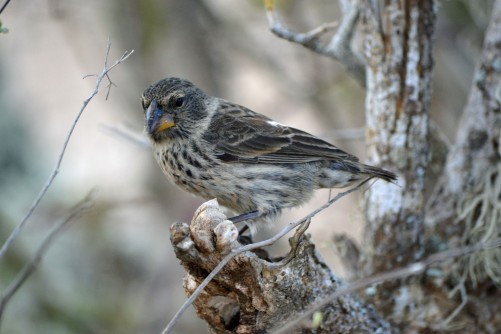 A female medium ground finch, one of at least 14 species of Darwin’s finches in the Galapagos Islands, Ecuador. 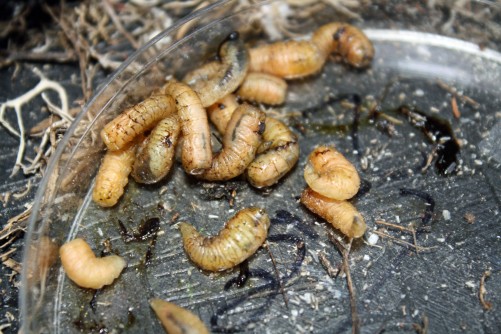 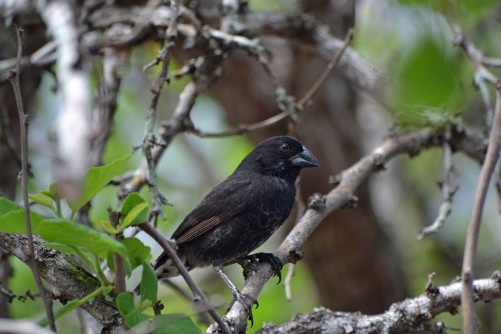 A male medium ground finch, one of at least 14 species of Darwin’s finches in the Galapagos Islands, Ecuador. 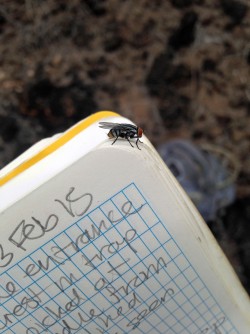 A fly of the species Philornis downsi, which infests the nests of Darwin’s finches in Ecuador’s Galapagos Islands.

Newswise — SALT LAKE CITY, Dec. 17, 2014 – Mathematical simulations at the University of Utah show parasitic flies may spell extinction for Darwin’s finches in the Galapagos Islands, but that pest-control efforts might save the birds that helped inspire the theory of evolution.

The new study “shows that the fly has the potential to drive populations of the most common species of Darwin’s finch to extinction in several decades,” says biology professor Dale Clayton, senior author of the study published online Dec. 18 in the Journal of Applied Ecology.

But the research “is not all doom and gloom,” he adds. “Our mathematical model also shows that a modest reduction in the prevalence of the fly – through human intervention and management – would alleviate the extinction risk.”

Several approaches may be needed, such as introducing fly-parasitizing wasps, removing chicks from nests for hand-rearing, raising sterile male flies to mate with females so they can’t lay eggs in finch nests, and using insecticides, including placing pesticide-treated cotton balls where birds can collect them to self-fumigate their nests.

Pigeons were more important to Charles Darwin’s theory of evolution than finches, partly because he failed to label finches he collected in the Galapagos to denote the islands where he collected the birds. Nevertheless, Darwin observed how different Galapagos finch species evolved varying beak and body sizes.

“Darwin’s finches are one of the best examples we have of speciation,” says the new study’s first author, Jennifer Koop, who did the research as a University of Utah doctoral student and now is an assistant professor of biology at the University of Massachusetts Dartmouth. “They were important to Darwin because they helped him develop his theory of evolution by natural selection.”

Darwin’s finches live only in the Galapagos Islands, off the coast of mainland Ecuador. The finches began as one species and started evolving into separate species an estimated 3 million to 5 million years ago.

The new study dealt with medium ground finches, Geospiza fortis, among the most common of at least 14 species and perhaps 18 species of Darwin’s finches. One of them, the mangrove finch, already “is facing potential total extinction because it is present in only two populations on a single island, Isabela,” Koop says. Clayton says that if the parasitic nest fly, Philornis downsi, “can lead to extinction of such a common species, then the less common species – which have the same fly problem – are likely at risk as well.” In addition to the medium ground finch, other abundant species of Darwin’s finches are the small ground finch, cactus finch and small tree finch. The case of the flies and finches exemplifies how “introduced pathogens and other parasites pose a major threat to global diversity,” especially on islands, which tend to have smaller habitat sizes and lower genetic diversity, the researchers write.

Mathematically modeling finches’ future The study was performed on Santa Cruz Island in the Galapagos. An estimated 270,000 medium ground finches live on that island and perhaps 500,000 live throughout the Galapagos Islands, Clayton says. Museum records indicate the nest fly arrived in the Galapagos Islands in the 1960s. They first were documented in bird nests there in 1997. The new study is based on five years of data collected by Koop, Clayton and colleagues documenting fly damage to finch reproduction, and on mathematical modeling or simulation using that and other data.

The finches are more likely to breed successfully and survive during years when relatively high rainfall leads to an increased food supply. They breed and survive at lower rates during extremely wet and dry years.

To simulate such highly variable conditions and how they affect the probability of finches fledging from a fly-infested nest and thus population growth, the researchers used data from five years – 2008, 2009, 2010, 2012 and 2013. They ran three simulations: one weighted toward bad years for breeding and survival, one weighted toward good years and one equally weighted.

The researchers included nine variables or parameters in the simulations, and they varied each parameter’s value by plus or minus 25 percent to see which were important to the risk of extinction. Only two played major roles: The probability that a given nest was infested by flies, and to a lesser extent, the proportion of adult finches that survive from one year to the next (based on data from an earlier study on another island).

The significant role of nest infestation in extinction risk has an upside for medium ground finches.

“Even though these guys may be going locally extinct, the model also shows that if you can reduce the probability of infestation, then you significantly alleviate the risk of extinction,” Koop says.

Clayton adds: “If we can reduce the number of nests with the flies, then it will reduce the risk of extinction substantially.”

“We predict they will no longer go extinct” if intervention reduced fly infestation of finch nests by 40 percent, she adds. In addition to the various possible human actions to combat fly infestation, Clayton says it is possible “there will be a rapid evolutionary response by the birds, and their immune systems would rapidly develop the ability to combat the fly. That happens in other animals. The question is, will these finches have enough time to develop effective defenses before they are driven to extinction by the fly? It’s an arms race.”

The study was funded by the National Science Foundation; Sigma Xi, the Scientific Research Society; National Institutes of Health; Australian Research Council; University of Utah Global Change and Sustainability Center and a Frank Chapman grant from the American Museum of Natural History. Koop and Clayton conducted the study with Fred Adler, a University of Utah professor of mathematics and biology; former Utah biology doctoral student Sarah Knutie, now at the University of South Florida; and former Utah mathematics postdoctoral fellow Peter Kim, now at the University of Sydney, Australia.