24-Aug-2016 1:05 AM EDT, by University of Miami, Rosenstiel School of Marine and Atmospheric Science
favorite_border 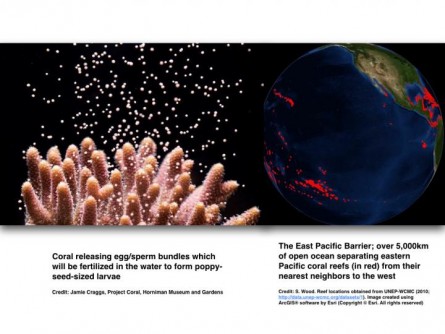 Left: Coral releasing egg/sperm bundles will be fertilized in the water to form poppy-seed-sized larvae. Right: The East Pacific Barrier; over 5,000km of open ocean separating eastern Pacific coral reefs (in red) from their nearest neighbors to the west.

To trace the journey of coral larvae transported by ocean currents in the Eastern Pacific Barrier, a 4,000-mile stretch of ocean that separates the central from the eastern Pacific Ocean, researchers from University of Bristol and Penn State University used Paris' biophysical model on Bristol University's BlueCrystal supercomputer to simulate five billion model 'larvae' from 636 remote reefs traveling on ocean currents over a 14-and-a-half year period.

"This work wouldn't have been possible until recently because of the computer power, the climate data, and the probabilistic biophysical model necessary to find some robust modeling results," said Paris, a coauthor of the study. Paris' open-source software, called the Connectivity Modeling System, simulates the movement of larvae in the ocean by currents and incorporates aspects of their biology, such as development and death.

The simulations showed that even in extreme environmental events such as the 1997-1998 El Niño that speed ocean currents, coral larvae could not survive long enough to make the trip from coral reefs in the western and central Pacific to help corals in the east recover from recent environmental damage. The findings have also been confirmed by genetic analysis.

"Whether coral reefs can survive the pressure of climate change as well as local stresses will depend to a large extent on the ability of coral to reproduce and disperse; to replenish damaged populations, migrate from deteriorating conditions and colonize new frontiers," said Sally Wood, a coral reef researcher at the University of Bristol and lead author of the paper. "So it's important to map where coral are able to get to."

The results indicate that vulnerable coral populations in the eastern tropical Pacific have been completely isolated from the rest of the Pacific Ocean for at least the past two decades. The findings provide important information to conservation efforts for the economically and environmentally important coral reefs in the eastern Pacific Ocean.

"While genetic data can tell us the degree to which coral reefs are related, the model reveals the processes by which larval connectivity or barrier to their dispersal happens. This is important for effective conservation measures." said Paris.

Reefs provide habitats for one of the most diverse ecosystems in the world and they are extremely economically important for fisheries, coastal protection, tourism, the aquarium trade, and as sources for new pharmaceuticals. The reefs in the eastern Pacific that we study are particularly important because they survive in inhospitable conditions, and understanding how they do this could be critical when designing strategies for reef conservation as climates continue to change.

The team found that even during the record-breaking El Niño of 1998, coral larvae could not survive long enough to make the trip from reefs in the central Pacific to those in the east. These findings support the opinion of Charles Darwin, who considered this intimidating expanse of open ocean 'impassable' and counter recent arguments that the 'East Pacific Barrier' must be breachable since the same coral species are found on both sides.

The study, titled "El Niño and coral larval dispersal across the Eastern Pacific marine Barrier," was published on line August 23, 2016 in the journal Nature Communications, doi:10.1038/ncomms12571. The study's coauthors also included: Andy Ridgwell from the University of California, Riverside; William S. Kessler from NOAA's Pacific Marine Environmental Laboratory in Seattle; and Erica J. Hendy from the University of Bristol.

About the University of Miami's Rosenstiel School

The University of Miami is one of the largest private research institutions in the southeastern United States. The University's mission is to provide quality education, attract and retain outstanding students, support the faculty and their research, and build an endowment for University initiatives. Founded in the 1940's, the Rosenstiel School of Marine & Atmospheric Science has grown into one of the world's premier marine and atmospheric research institutions. Offering dynamic interdisciplinary academics, the Rosenstiel School is dedicated to helping communities to better understand the planet, participating in the establishment of environmental policies, and aiding in the improvement of society and quality of life. For more information, visit: http://www.rsmas.miami.edu.