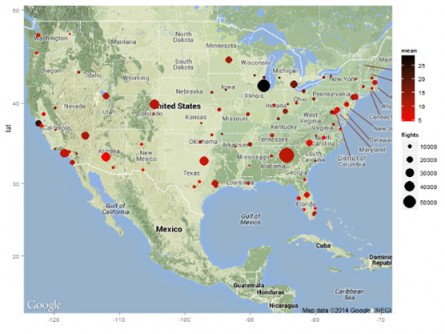 This map of average inbound flights, outbound flights and delays, created by UChicago students Tiffany Lin and Michelle Wang, was part of the winning portfolio for the proposal category of the Data Visualization Challenge.

This year’s contestants attempted to make math beautiful as they showed trends in topics as varied as the relationship between Mexican state and criminal agents in drug trafficking to the relationship between foreign investment and female employment in Indonesia. The latter entry won the prize for the finished data visualization category.Data visualization is a rapidly growing field of statistics that attempts to portray connections in data through graphs, with the goal of making the information attractive and interactive yet still coherent to its audience.

“Data visualization is a popular buzzword, but there is a difficult challenge in showing data in a manner simple enough to understand, but nuanced enough to display a number of important features in an objective manner,” said Nelson Auner, a student in statistics and economics. “I draw inspiration from the The New York Times and Hans Rosling for visualizations that let the data speak for themselves, yet are intuitive and aesthetically pleasing.”

His entry, titled “Making Indonesia,” comprises a number of graphs, starring Rosling’s moving bubble chart, which can display up to four dimensions of data at once. Taking first place in the visualization proposal category was “Visualizing Flight Delay,” by first-years Tiffany Lin and Michelle Wang.

“IT Services has run challenges in the past in conjunction with UChicago Tech and the Polsky Center at the Chicago Booth School of Business. We know that data visualization is a hot topic, but it wasn’t clear what might already be going on at UChicago,” said Cornelia Bailey, strategic innovation consultant for IT Services. “The challenge was to draw out the people who might be doing it.”

There were eight entries for the finished works category and five for the visualization proposal this year. The challenge was limited to the social sciences during its first year. Bailey said that IT Services and the other sponsors would broaden the challenge to include other fields.

During the course of the challenge, Bailey discovered the existence of Data Analysts for Social Good at UChicago, a registered student organization created in the spring that already is 200 members strong. Julia Bobson, a member and a rising third-year at UChicago, said they became aware of the challenge when another member received an email describing it. Winners Lin and Wang are part of the group as well.

“Data visualization as a field is really helpful,” said Bobson, a double major in public policy and statistics. “There are many ways to play with data and make it tell the story you want it to tell, but I’m glad it exists because it makes dry and dull numbers easy to understand.”

DASG is interested in analytics, data mining and data science, and how those techniques relate to fields that benefit society. Plus, the group hosts events such as workshops that teach data analysis skills and coding languages such as Python, and is involved in community non-profits in Chicago. The goal is to create a project where students from UChicago and RSOs can be involved in movements relating to data analytics.

DASG members are working with the Chicago Department of Public Health, Illinois Coalition for Immigrant and Refugee Rights and Cancer IQ, but are hoping to grow and find more connections over the summer. They are planning to play a greater role in the Data Visualization Challenge next year. —Erin Fuller