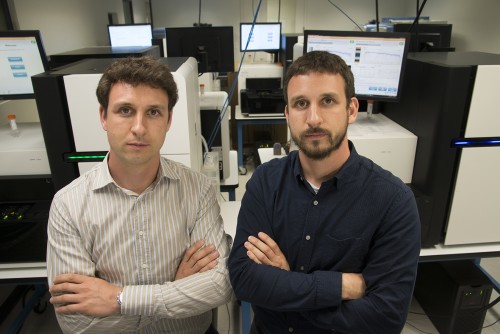 Twin brothers Obi Griffith, PhD, and Malachi Griffith, PhD, have created a comprehensive database that matches thousands of disease genes with approved or experimental drugs that target those genes.

Newswise — Researchers at Washington University School of Medicine in St. Louis have created a massive online database that matches thousands of genes linked to cancer and other diseases with drugs that target those genes. Some of the drugs are approved by the U.S. Food and Drug Administration, while others are in clinical trials or just entering the drug development pipeline.

The database was developed by identical twin brothers, Obi Griffith, PhD, and Malachi Griffith, PhD, whose interest in pairing drugs with genes is as much personal as it is scientific. Their mother died of breast cancer 17 years ago, just weeks before their high school graduation.

“We wanted to create a comprehensive database that is user-friendly, something along the lines of a Google search engine for disease genes,” explained Malachi Griffith, a research instructor in genetics. “As we move toward personalized medicine, there’s a lot of interest in knowing whether drugs can target mutated genes in particular patients or in certain diseases, like breast or lung cancer. But there hasn’t been an easy way to find that information.”

Details of the Drug Gene Interaction database are reported online Oct. 13 in Nature Methods. The database is weighted heavily toward cancer genes but also includes genes involved in Alzheimer’s disease, heart disease, diabetes and many other illnesses. The Griffiths created the database with a team of scientists at The Genome Institute at Washington University in St. Louis.

The database is easy to search and geared toward researchers and physician-scientists who want to know whether errors in disease genes – identified through genome sequencing or other methods – potentially could be targeted with existing drug therapies. Additional genes included in the database could be the focus of future drug development efforts because they belong to classes of genes that are thought to make promising drug targets.

“Developing the database was a labor of love for the Griffiths,” said senior author Richard K. Wilson, PhD, director of The Genome Institute. “There’s an amazing depth to this resource, which will be invaluable to researchers working to design better treatment options for patients.”

Wilson and his colleagues caution that the database is intended for research purposes and that it does not recommend treatments. The primary purpose of the database is to further clinical research aimed at treating diseases more effectively.

“This database gets us one step closer to that goal,” Malachi Griffith said. “It’s a really rich resource, and we’re excited to make it available to the scientific community.”

The database, which took several years to develop, is publicly available and free to use. It includes more than 14,000 drug-gene interactions involving 2,600 genes and 6,300 drugs that target those genes. Another 6,700 genes are in the database because they potentially could be targeted with future drugs.

Before now, researchers wanting to find out whether disease genes could be targeted with drugs had to search piecemeal through scientific literature, clinical trials databases or other sources of information, some of which were not publicly available or easily searchable. Further, many of the existing databases have different ways of identifying genes and drugs, a “language” barrier that can turn a definitive search into an exhaustive exercise.

The Griffith brothers are experts in bioinformatics, a field of science that integrates biology and computing and involves analyzing large amounts of data. The brothers got the idea for the drug-gene interaction database after they repeatedly were asked whether lists of genes identified through cancer genome sequencing could be targeted with existing drugs.

“It shouldn’t take a computer wizard to answer that question,” said Obi Griffith, research assistant professor of medicine. “But in reality, we often had to write special software to find out. Now, researchers can quickly and easily search for themselves.”

The new database brings together information from 15 publicly available databases in the United States, Canada, Europe and Asia. Users can enter the name of a single gene or lists of many genes to retrieve drugs targeting those genes. The search provides the names of drugs targeted to each gene and details whether the drug is an inhibitor, antibody, vaccine or another type. The search results also indicate the source of the information so users can dig deeper, if they choose.

The research is supported by a grant (U54 HG003079) from the National Human Genome Research Institute at the National Institutes of Health (NIH).