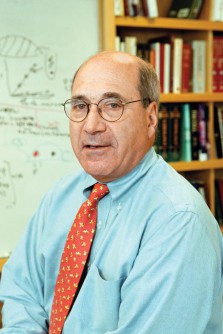 Livingston, a cancer biologist, will receive the Pezcoller Foundation-AACR International Award and deliver a lecture at the AACR Annual Meeting on April 2, 2017 at the Washington Convention Center in Washington, DC. The award was established in 2007 to recognize a scientist who has made major scientific discoveries in basic cancer research, or who has made significant contributions to translational cancer research; who continues to be active in cancer research, and has a record of recent and noteworthy publications; and whose ongoing work holds promise for substantive contributions to progress in the field of cancer.

Livingston is the Emil Frei Professor of Genetics & Medicine at Harvard Medical School, and is the deputy director of the Dana-Farber/Harvard Cancer Center.

He is a renowned expert on the molecular origins of breast and ovarian cancer, focusing on genes that regulate cell growth, including the tumor suppressor genes Rb, p300/CBP, BRCA1 and BRCA2. His work has been the cornerstone of many studies of cancer susceptibility linked to BRCA function and mutations. By understanding the tumor suppressive properties of BRCA1 and BRCA2, Livingston has paved the way for studying novel approaches to breast and ovarian cancer prevention.

About Dana-Farber Cancer InstituteFrom achieving the first remissions in childhood cancer with chemotherapy in 1948, to developing the very latest new therapies, Dana-Farber Cancer Institute is one of the world’s leading centers of cancer research and treatment. It is the only center ranked in the top 4 of U.S. News and World Report’s Best Hospitals for both adult and pediatric cancer care.