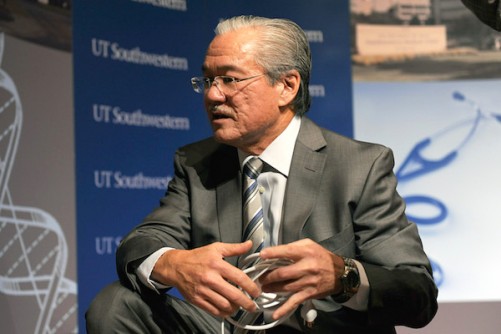 Dr. Joseph Takahashi is Chairman of Neuroscience and a Howard Hughes Medical Institute Investigator, who holds the Loyd B. Sands Distinguished Chair in Neuroscience. Dr. Takahashi will be presenting his research at the Peter O'Donnell Jr. Brain Institute's Circadian and Sleep Medicine Symposium March 9, along with investigators from the National Center on Sleep Disorders Medicine at the National Institutes of Health, the Stanford Center for Sleep Sciences and Medicine, the Center for Sleep and Circadian Neurobiology at the University of Pennsylvania, and the Center for Circadian and Sleep Medicine at Northwestern University.

The merits of the concept – originally rooted in energy conservation – are still debated today as more scientific studies examine the unusual ways that setting the clock forward just one hour can affect our lives.

Do more drivers crash due to lack of sleep? Can the disruption to our normal body-clock cycle cause more heart attacks?

As we embark on another spring of sunlit evenings, who better to address how daylight saving time affects our body clock than the father of the CLOCK gene: Dr. Joseph Takahashi of the Peter O’Donnell Jr. Brain Institute at UT Southwestern Medical Center.

Below are a few issues commonly tied to the time change, followed by Dr. Takahashi’s take on each:

Studies have shown the days immediately following the time change can cause more daytime sleepiness and less attention at school and work. Does this affect certain people more than others, and how can this be avoided?

Dr. Takahashi: “It is likely that advancing our clocks in the spring would more affect owls, those individuals who tend to stay awake later at night and consequently wake up later in the morning. Less affected are the larks, those individuals who tend to wake up early and go to sleep earlier. Since being an owl or a lark is in large part genetically influenced, the best way to deal with daylight saving time is to be self-aware of your chronotype (early vs. late awakening and sleeping) and to realize that advancing your clock will be harder if you are an owl and easier if you are a lark.”

Some people report they have more cluster headaches when the clocks are moved. Is there a scientific link between the two, or could this be due to other seasonal issues such as allergies?

Dr. Takahashi: “I’m not aware of any studies that have directly linked daylight saving time with cluster headaches, so it could be a coincidence. Or, it could be triggered by the slight additional stress caused by resetting our rhythms.”

Research through the years have both supported and debunked the idea that vehicle accidents spike directly after daylight saving time begins, particularly the Monday after the clock jumps forward. Any insight to keep us safe behind the wheel?

Dr. Takahashi: “Perhaps it might be a good approach to be sure to go to sleep slightly ahead of your normal bedtime, have an extra coffee and be vigilant on the road.”

Studies indicate the rate of heart attacks increases in the first few days after daylight saving time starts. Why would this be?

Dr. Takahashi: “It is now well established that the incidence of heart attacks is highest in the morning. Since waking up one hour earlier adds to stress and sleep deprivation, these might contribute to the increase.”

Any general tips for those of us who have a tougher time adjusting to the new schedule?

Dr. Takahashi: “As we discussed, self-awareness of your chronotype and good sleep hygiene are the best tips. To self-assess your chronotype, you can take a simple questionnaire at Munich Chronotype. You can also check out the National Sleep Foundation.”