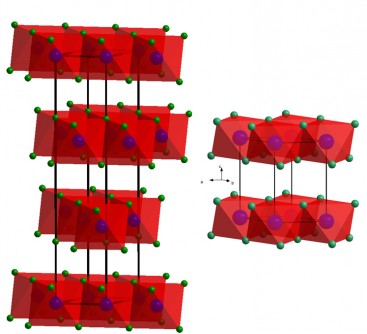 Magnesium chloride (MgCl2) is well known to be an effective de-icing agent, for example, in the aviation industry. Magnesium compounds, including MgCl2, also could function at extreme conditions as effective biocidal agents and work to neutralize biological weapons. The high pressure properties of these materials are important for understanding and predicting their behavior in complex chemically reactive environments such as detonations that are of interest to the Defense Threat Reduction Agency (DTRA).

The team observed an extensive stability of MgCl2 under pressure that contradicts the well–established structural systematics. The research is published in the Aug. 12 edition of Scientific Reports.

The immediate technical aim of the study was to provide equations of state (EOS) and structural phase diagrams to improve the confidence of semi-empirical thermochemical calculations predicting the products and performance of detonated chemical formulations.

In contrast, MgCl2 remained in a low layered structure. Even after crossing past the 1 MBar (1 million atmospheres) pressure limit, no structural phase transition was observed.

The team’s experimental results also were confirmed by first principle calculations performed by their collaborator, Assistant Professor Yansun Yao at the University of Saskatchewan. According to Yao, the surprising pressure stability is inherent and not due to a kinetic barrier.

Stavrou explained: "High pressure compounds are archetypal ionic solids and after nearly 50 years of systematic study theorists tend to suggest that these pressure dependent structures and transitions are predictable. Our results highlight the need to re-examine currently established structural systematics and to be prepared for unexpected results.”

This research was funded by the Defense Threat Reduction Agency. Other researchers include Bora Kalkan and Martin Kunz of Lawrence Berkeley National Laboratory.