Dean Smith Wasn’t Just a Master of the Game; He Was an Expert in “Coachtalk,” Says Sports Communications Author 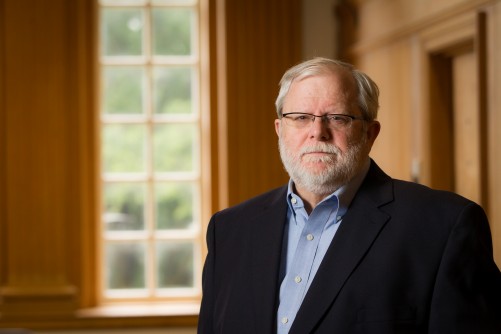 Dean Smith wasn’t just a master of the game; he was an expert in “coachtalk,” said sports communications expert John Llewellyn.

While the legendary North Carolina basketball coach has been widely remembered for his many contributions to the sport – everything from racial integration to four-corner offense – Llewellyn said Smith also set the standard for how coaches use to generate hope and explain outcomes.

Llewellyn, a communication professor at ACC rival Wake Forest University, analyzed the professional language of Division I men’s college basketball coaches, including Smith’s, for “Coachtalk,” a chapter in the book “Case Studies in Sport Communication.” He reviewed post-game comments from other celebrated coaches such as Mike Krzyzewski, Bob Knight and Tom Izzo and found recurring themes that both winning and losing coaches employ.

“Winning coaches elevated all aspects of the game, while remaining humble, and reinforced the traditional values of sport. Dean Smith was the master of ‘coachtalk’ long before the age of social media and 24-hour news cycles created a culture of constant chatter by fans,” said Llewellyn.

Llewellyn pointed to former North Carolina coach Dean Smith as a good example of the way winning coaches make heroic the championship game after it is over.

“Sitting on the bench it seemed like just another game. But now, as you talk it back to me, it doesn't,” he said to reporters after winning the 1982 NCAA championship.

“Throughout his career Dean Smith had a genius for building communication and teamwork: the foul line huddle to set defenses, the point-to-the-passer acknowledgement when a teammate scored on an assist, the practice that everyone on the bench stands for the man who comes out of the game. All of these actions reinforced the common purpose that is central to great teams and collective effort. These innovations were in the realm of basketball but the underlying principles are true for any group effort,” he said.

Connecting with a courtside legend

Llewellyn, who completed his undergraduate studies at UNC-Chapel Hill, keeps a personal note from Smith in a lock box with other treasured papers. The letter was a response to an article in which Smith was quoted and Llewellyn sent him about “coachtalk.”

“This was an academic cover for a fan letter. I explained how I felt in sync with his Carolina teams and thought I could sense when a comeback was beginning,” Llewellyn said. “In his reply he took me through his strategic adjustments after the shot and spelled out the details as though communicating with a peer. What a gracious act!”

“I also told him of my UNC roommate, Larry Matthews, the last man cut from the 1967 freshman team. Matthews, a hell of a defender, had been assigned to guard a then-unknown Dale Gipple. Well, Gipple lit up Matthews because, as ACC fans would learn, Gipple was a top-notch shooting guard and lit up many of the conference's best defenders. But Matthews was cut because Gipple's reputation had not yet caught up with his actual talent. Coach Smith had kind words for both Matthews and Gipple. The letter was a metaphor for the man: kind, thoughtful, and gracious.”