Not all bacteria spread diseases, many are beneficial and this strain has nanoscale syringes that deliver proteins which cause metamorphosis in marine animals, and could be modified as a novel drug delivery tool for future vaccines and cancer care 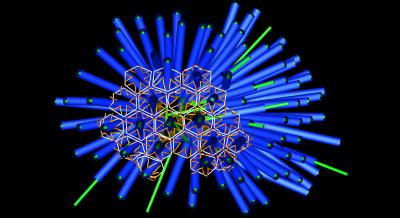 'Death Star' bacterial syringe structure -- Metamorphosis Associated Contractile structures (MACs) discovered by SDSU marine microbiologist Nicholas Shikuma and his lab team. It injects a protein into animal cells that leads to metamorphosis, it may also be in the human gut,and could be tapped to deliver targeted drugs in the future.

Newswise — By scraping tubeworms off the bottom of boats in the San Diego harbor to study them, San Diego State University researchers discovered that a beneficial bacterium that aids them in establishing colonies could also be a boon for human health, because the same process might already take place in the human gut.

By examining this bacterium that causes metamorphosis in the humble tubeworm, marine microbiologists at SDSU discovered that the nanoscale syringe-like structures produced by it - a structure nicknamed the Death Star for the effect it has - could be used in the future to deliver novel therapeutics or vaccines to targeted cells and tissues in humans.

Tubeworms (Hydroides elegans) are tiny marine creatures with hard shells that cause a lot of trouble and economic loss for boat and ship owners. They stick to the bottoms of boats and form inches-thick crusty layers, and also attract other invertebrates like barnacles that then form on top of them. This so called 'biofouling' leads to additional weight and higher fuel consumption. So, everyone from the U.S Navy to the shipping and boat building industry is interested in finding out how they do this and what can be done to prevent it from happening.

Nicholas Shikuma with SDSU has been studying tubeworms for several years with students in his lab, to understand exactly why they are drawn to certain places in the ocean where they establish colonies.

Previous research by others showed that like coral reefs, sea urchins and sea squirts, the tubeworms also needed a conducive environment to reproduce, so they typically gravitated to areas with healthy populations of bacteria like Pseudoalteromonas, a beneficial bacterium. Shikuma discovered that the bacterium has Metamorphosis Associated Contractile structures (MACs) - syringe-like structures that inject content into the larvae of tubeworms, helping transform it into juvenile worms.

What he and fellow scientists did not know was if the MACs were injecting a biochemical into the tubeworm to cause metamorphosis and to stick to boat hulls. Shikuma's lab used cryo-electron tomography imaging to study the structures and found arrays of death star shaped injection systems, which are released by the bacterium.

They discovered that the syringe structures contained a novel effector protein, Mif1, that regulates biological activity in the tubeworm host, and it's this protein that's responsible for causing metamorphosis.

"Lots of pathogens produce these syringe structures that typically cause disease," Shikuma said. "But this is the first time we discovered bacteria that use the syringe for a symbiotic purpose."

Stealing syringes from phages, but for good cause

The MACs resemble similar syringe structures found on bacteriophages - viruses that infect bacteria - and with evolution, the bacteria have 'stolen' this structure from the phages, and have put it to good use.

"Phage typically attack bacteria with these structures, but instead of using it to infect other bacteria, the Pseudoalteromonas now uses it to interact with other animals, such as tubeworms, insects, and mouse cells," Shikuma said.

"MACs are created when the bacteria undergo cell lysis - when the cells blow themselves up - and the bacteria that do this die afterwards, so it's almost like altruism because it benefits the rest of the bacterial population."

Not every bacterium in this strain produces the MACs, only about one out of 50 do so, but since we can produce trillions of these bacteria, supply will not be an issue and more of them can be engineered to produce MACs, he explained.

The findings will be published September 17th in eLife journal, and follow on the heels of a recent publication from Shikuma's lab that was published in Cell Reports in June this year which looked at how this bacterium interacts in vitro with insect and mouse cells. That paper showed how the microscopic syringe structures could be modified with payloads that could potentially carry therapeutics or vaccines.

Shikuma has obtained a provisional patent for the findings in both papers, on using the MACs to deliver modified proteins. As a next step, current research in his lab involves mining data from the Human Microbiome Project to see if we humans have this same bacterial syringe structure in our guts that can be harnessed for therapeutics.

This research was funded by a grant from the Office of Naval Research, and a Sloan research fellowship from the Alfred P. Sloan Foundation.

Shikuma and his team of graduate and post-graduate students including Charles Ericson, Giselle Cavalcanti, and Kyle Malter, worked collaboratively with Robert Zeller, an SDSU biologist, and microbiologists Dianne Newman with the California Institute of Technology and Martin Pilhofer at ETH Zurich (Switzerland).