Sugar-based compounds could lead to ways to bypass antibiotic resistance 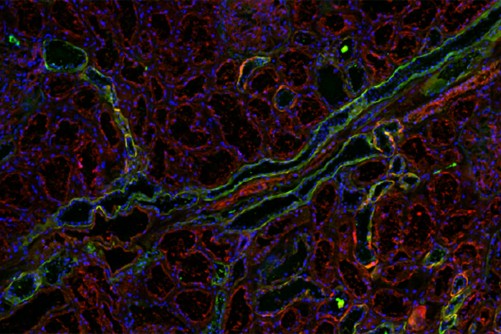 Green marks the spots where a bacterial protein binds to human kidney tissues, a key step in urinary tract infections. Researchers at Washington University School of Medicine in St. Louis have designed sugar molecules that block the bacteria from binding, allowing them to be washed out of the urinary tract. The compounds represent a step toward treating UTIs without antibiotics.

Newswise — Half of all women will experience the pain and burning of a urinary tract infection (UTI) at some point in their lives. Most such infections can be successfully treated with antibiotics, but antibiotic resistance – the ability of bacteria to withstand antibiotics – is a growing problem.

Now, researchers at Washington University School of Medicine in St. Louis report they have found a way to treat UTIs without using antibiotics, at least in mice. The study is published March 5 in Proceedings of the National Academy of Sciences.

“Millions of women every year suffer UTIs, and they’re getting harder to treat,” said co-senior author Scott J. Hultgren, PhD, the Helen L. Stoever Professor of Molecular Microbiology. “We’ve shown that just by blocking the bacteria from adhering to the mice’s urinary tracts, we can treat the infection. This is a new way of approaching the problem of antibiotic resistance.”

The bacteria Escherichia coli (E. coli) cause 80 percent of UTIs, leading to painful, burning urination. The bacteria then sometimes travel to the kidneys, causing back pain and fever. In rare cases, they spread to the blood, a potentially lethal complication.

Often, UTIs can be cleared up with antibiotics, but 10 to 20 percent of cases do not respond to current first-line drugs. Hultgren and his colleagues are working on an alternative that would prevent bacteria from causing disease, which may help reduce dependency on antibiotics.

E. coli‘s first step in causing UTIs is to latch onto sugars on the surface of the bladder with long, hairlike structures called pili. Hultgren and co-senior author James W. Janetka, PhD, an associate professor of biochemistry and molecular biophysics, previously created mannosides, modified forms of a sugar called mannose, that the bacteria favor over typical sugars on the bladder wall. When mice with UTIs were given the mannosides, the E. coli in their bladders grabbed hold of those molecules and were swept away.

Vasilios Kalas, an MD/PhD student in Hultgren’s lab, worked in collaboration with Janetka to design and screen modified forms of galactose known as galactosides to find versions that attach firmly to the adhesive proteins at the end of the bacteria’s pili. Using X-ray snapshots of galactosides bound to the adhesive protein as a guide, they synthesized even stickier versions of these molecules. Then, they pitted each new galactoside against galactose in a competition to see which attached best to the bacterial protein. Galactosides that outcompete galactose may be able to serve as decoys, they reasoned, tricking bacteria into catching hold of a floating galactoside instead of a urinary tract-anchored galactose.

“We showed that we can administer two different inhibitors and see a synergistic therapeutic effect,” said Kalas, the paper’s first author. “The data suggest that both types of pili play a role in attachment during infection.”

The pilus that attaches to mannose plays a bigger role in the bladder, while the pilus that recognizes galactose seems to be more important in the kidneys. Foiling the bacteria’s attempts to grasp both sugars could target both uncomplicated and serious bladder and kidney infections.

A drug that undermines the bacteria’s ability to stay in the body is less likely to drive resistance because, unlike antibiotics, it would not force bacteria to die or evolve resistance in order to survive, the researchers said.

“We’re not killing them, we’re just helping flush them out of certain environments where they can do damage,” Kalas said.

The researchers also demonstrated that the galactoside prevented the bacteria’s adhesive protein from sticking to human kidney tissue.

Before the galactoside can enter human trials, further work is needed to show that it is not toxic and can be absorbed into the circulation when taken by mouth. Nevertheless, the researchers are confident they have taken an important step toward developing alternatives to antibiotics.

“With this paper, we have now successfully targeted two different sugar-protein interactions with a proven strategy,” Janetka said. “The first step for many disease-causing bacteria is to bind a sugar on a body surface, so this same antibiotic-sparing approach could be applied to other pathogens besides E. coli. If we can identify other adhesive proteins that bacteria use to stick to specific sites in the human body, in many cases we should be able to design compounds to inhibit their binding.”

Hultgren and Janetka co-founded a company, Fimbrion Therapeutics, with Thomas M. Hooton, MD, of the University of Miami School of Medicine, to develop mannosides and other drugs as potential therapies for UTI. Fimbrion is working with GlaxoSmithKline on the preclinical development of mannosides for use in combating UTIs in humans.