Newswise — Once Rafael Duran, ophthalmology technician, positions patient Maria Cortez Orozco just right in front of the high-optic retinal scan camera, he turns off the lights and waits for Orozco’s eyes to dilate. After a swipe of a touch-screen command, the machine whirls, shifts and centers itself on the right eye. Another swipe; and the camera takes similar high-resolution images of the left eye.

The process takes only a few minutes. However, those images to trained experts at Harris Health System yield vital information about a patient’s vision. In particular, signs of diabetic retinopathy, as well as other eye problems including macular degeneration, glaucoma, cataracts and retinal pathology. Diabetic retinopathy is the leading cause of preventable blindness in the U.S., and one of the most common disabilities tied to diabetes.

In 2013, Harris Health became the first healthcare system in Texas to feature a cutting-edge combination screening and software technology to detect diabetic retinopathy. Intelligent Retinal Imaging Systems (IRIS) offers an auto-read function that has a better-than-97-percent positive detection rate. However, it’s techs like Duran who contribute greatly to a successful screening.

“You have to take your time and do it right for the ophthalmologist to have good images to examine,” says the four-year Harris Health employee at El Franco Lee Health Center. “We take pride in getting the best images and making sure our patients get the best service.”

For Orozco, the eye exam is a relief to find out her vision is healthy.

“Most people don’t know that diabetes can affect your eyesight,” she says. “I’m glad the doctors are able to make sure my vision is doing well.”

Duran and the team of ophthalmology techs at El Franco Lee boast one of the best production rates of readable retinal scans at 99 percent (meaning the quality of scans is near perfect 99 percent of the time). They’re also first in customer service among the 13 Harris Health screening locations.

IRIS uses software that highlights disease seen in the retina using a computer algorithm to detect suspicious areas—similar to how geologists map the earth to drill for oil. Any abnormal image is examined by ophthalmologists and results are available in a few days.

“Some patients don’t understand the importance of the screenings and that it takes only a few minutes to get results quickly,” Duran explains. “After we tell them what to expect, they go ahead and get the scans done. We just want them to have good eyesight.”

All people with diabetes — type 1 and 2 — are at risk. In fact, the longer someone has diabetes, their chance of getting diabetic retinopathy rises between 40-45 percent, according to the National Eye Institute of the National Institutes of Health. Diabetic retinopathy is caused by changes in the blood vessels of the retina, the light-sensitive tissue at the back of the eye.

Harris Health treats about 50,000 patients with diabetes. Because diabetic retinopathy can show no symptoms in early stages, doctors recommend people with diabetes get a retinal exam at least once a year. The screening program allows staff to detect disease earlier to prevent vision loss. If detected early, people can have successful treatments including medications, laser and microsurgery that can stop or slow vision loss. Treatments have a higher success rate if treated early, however, there is no cure for diabetic retinopathy.

“We try to move quickly to serve our patients and make sure they have a good experience,” Duran says of his customer service approach. “We also educate them on how to take care of their eyes. If a patient takes our advice and we see them next time and they’re doing well, it makes us feel happy to know that we’ve helped them take care of themselves.” 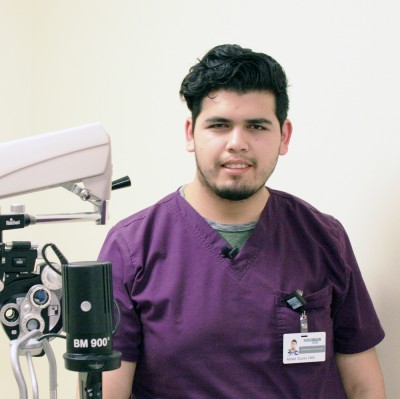 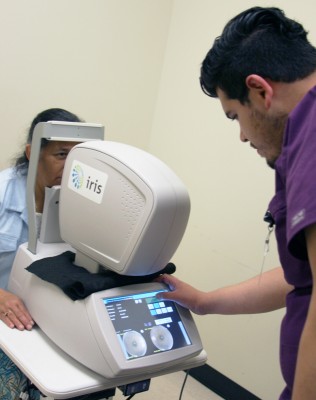 Caption: Maria Cortez Orozco prepares for a retinal eye scan by ophthalmology technician Rafael Duran. The screening looks for diabetic retinopathy or other eye diseases during her visit to Harris Health System’s El Franco Lee Health Center. Duran and his team have one of the best production rates of readable retinal scans.