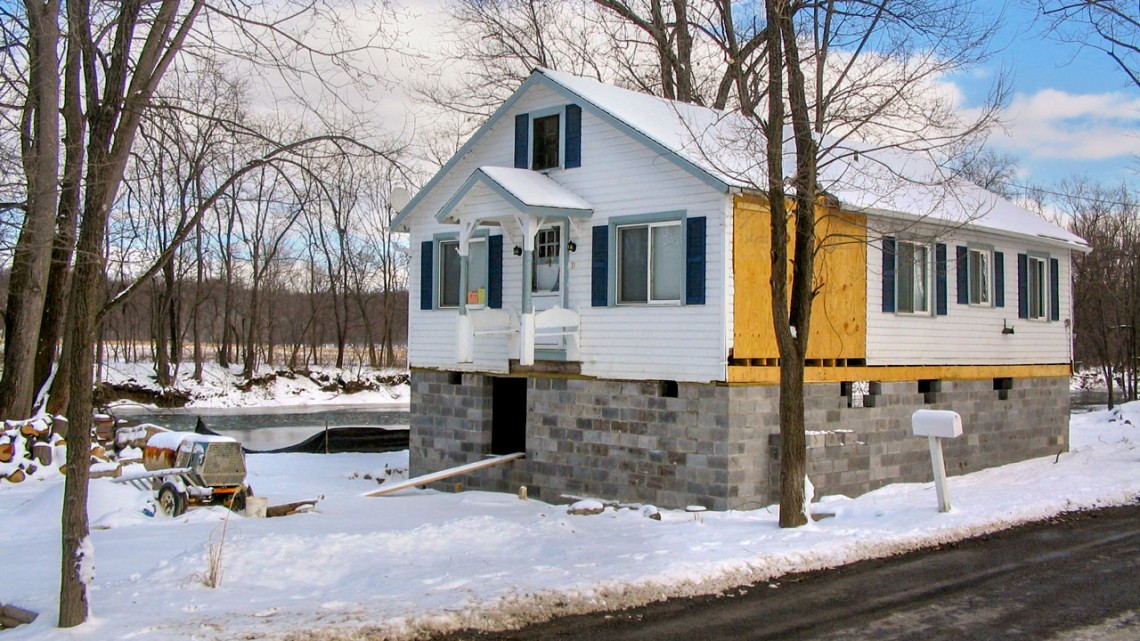 House being elevated to protect against flooding on Shawangunk Kill near the Hudson River in New York.

“Are we taxing America so that people with second homes on the water don’t have to pay as much?” asked Brian Rahm, director of the New York State Water Resources Institute at Cornell University.

Rahm is a co-author of the paper “Predicting Flood Insurance Claims with Hydrologic and Socioeconomic Demographics via Machine Learning: Exploring the Roles of Topography, Minority Populations, and Political Dissimilarity,” which published in the Journal of Environmental Management. James Knighton, an assistant professor at the University of Connecticut, is lead author of the study.

Flood insurance rate maps determine areas where people with federally backed mortgages are required to buy flood insurance, which is then subsidized by the Federal Emergency Management Agency (FEMA), lowering the insurance cost and the reducing the risk of living in a floodplain. At the same time, current flood insurance rates do not adequately account for how social demographics affect risk and vulnerability, but FEMA is taking steps to better understand the issues, Rahm said.

“In a lot of areas of society right now, issues of diversity, equity and environmental justice matter,” Rahm said. “The study suggests that flooding risk, vulnerability and recovery are influenced by the same types of factors of diversity and equity and access to government.”

The researchers combined social demographic data with hydrologic and topographic data to map flood-prone areas. When this data was run through a computer model, the researchers found that while topographic details did predict rates of flood insurance claims, predictions improved when social demographic variables – the percentage of minority residents, the value and age of houses, and political leanings in relation to state politics – were also factored in.

The study showed that places where residents take advantage of the flood insurance claims system tend to be more white, more affluent and, in New York, more Republican leaning, though these areas also have a mix of property values, and lower-income and minority residents, Rahm said.

The study raises implications that flood risk is not the same as flood vulnerability: Two houses may be side by side with the same risk, but only one homeowner may have the resources to raise their house, thereby reducing the house’s vulnerability to damage.

Also, by examining political leanings, the researchers tried to tease out how a person’s political identity may influence their willingness to engage with the government and file a claim.

“Some people might file claims while others don’t, simply because of how they view government and their relationship with government,” Rahm said. “At times, folks who have more resources are better able to utilize the system” and file claims, he said.

Traditional models of flood risk often depend purely on hydrologic and topographic factors. “We found that by bringing in some of these social demographic variables, we could actually better predict where the flood claims were coming from,” Rahm said.