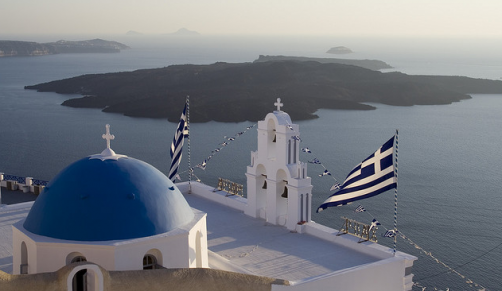 Greece's flag flies in Santorini. DePaul University faculty experts are available to provide insight and commentary on the financial and political crisis in Greece.

Animesh Ghoshal, professor of economics. An expert on international economics, Ghoshal believes the Eurozone crisis is rooted in the establishment of the Economic and Monetary Union. “While much attention has been given to fiscal balances, the basic issue is one of the loss of competitiveness, and here Greece faces a set of untenable choices,” said Ghoshal. “They can increase their relative productivity, which is feasible but difficult in the short run. They can decrease their relative wages through a long period of austerity, which is not likely to be acceptable in democratic societies. The third possibility is to change the exchange rate, which is not possible within the euro.” He can be reached at 312-362-8008 or [email protected].

Bruce I. Newman, professor of marketing. “The Greek crisis is not just unfolding in Greece, but all over the world through social media,” said Newman. “Influential individuals, organizations and government spokespeople are using political marketing to stand up to leaders of European countries who are demanding answers, solutions and proposals from Greek officials.” Newman is author of the forthcoming book, “The Marketing Revolution in Politics: What Recent U.S. Presidential Campaigns Can Teach Us About Effective Marketing.” According to Newman, “The ‘Obama Model’ of marketing is the new blueprint not just for politicians running for office, but for leaders of nations who want to drive public opinion around the world.” He can be reached at 312-362-5186 or [email protected].

Richard Farkas, professor of political science. An expert on Balkan affairs, Farkas believes “Greece will do itself irreparable damage if it continues to distance itself from the EU. Austerity is the answer and Greeks will need to recognize that sooner or with more pain later.” Interestingly, said Farkas, there are no political mechanisms for a member state to leave the EU. “If Greece wants to retain any control over its financial and fiscal policies, it must negotiate with its creditors more flexibly,” Farkas said. He can be reached at [email protected] or 773-325-1977.