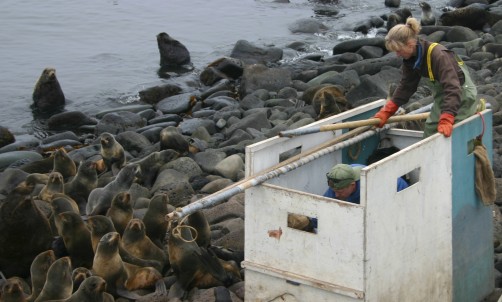 Newswise — It just takes a pinch. But from a sample of animal fat, Sara Iverson can determine what predators at the top of the food chain are eating, and by extension, how their diet has changed due to changes in ecosystems.

Changes in diet can be seen most dramatically in Arctic polar bears — “canaries in the coal mine when it comes to climate change,” according to Dr. Iverson, scientific director of the Ocean Tracking Network Canada and a University Research Professor at Dalhousie University in Halifax, Nova Scotia. She notes the polar bear is the first animal to be considered vulnerable because of the consequences of climate change. (Polar bears are listed as a threatened species under the Endangered Species Act in the U.S. and as a “species of special concern” in Canada.)

“Polar bears are absolutely dependent on sea ice to hunt seals, which use the ice as a platform to breed,” explains Dr. Iverson. “With the loss of ice, they’re having a difficult time. A major source of food has been removed and in some areas they’ve been forced ashore earlier in the spring in poor condition.”

Using the “quantitative fatty acid signature analysis” (or QFASA for short) she developed, Dr. Iverson, along with her graduate student Gregory Thiemann and Ian Stirling with the Canadian Wildlife Service, examined the diets of 1,700 polar bears across the Canadian Arctic over a 30-year period. The main food source for the bears were generally ringed seals— a food source that’s becoming scarce to the bears because of sea-ice breakup. Some bear populations have been able to adapt by taking advantage of other locally available prey such as harp seals and belugas. As well, larger polar bears were better able to cope by taking on walruses and large bearded seals.

QFASA has proven to be an important tool, allowing researchers to do their work without harm to the animals. Prior to its development, estimates of diet were imprecise and limited to only the animal’s last meal.

Even so, it can still be quite a process to obtain the samples required for analyses. For example, the male northern fur seal is notoriously vicious, given its massive size (340 kg) and predilection for fighting. To study fur seals, the researchers (three at a time) assemble in a plywood box with no ceiling or floor, and shuffle into the midst of the rookery. They bring females into the box one at a time, take samples and attach a tag, before releasing them again, all the while with one person on the lookout for the ornery males.

“You have to have a good sense of humor and there are times when you think, ‘what in the world am I doing here?’” she says. “But it is absolutely incredible to see these animals in their natural environment.”

Northern fur seals, which were hunted almost to extinction during the last century, have thrived on St. Paul Island in the Bering Sea since the hunting ban 100 years ago. However, now the northern fur seal population is crashing again, and researchers are trying to figure out why. Theories include nutritional limitation – food is scarce because of overfishing or climate change – or predation by killer whales which have also had to look for a new food source.

QFASA is one of several innovative tools researchers have to study marine mammals, which are elusive subjects because they spend so much of their time in the sea. Others include satellite tags, physiological and chemical tracers and “critter cams,” which let the researchers “see what the seal sees.”

But for Dr. Iverson, good, old-fashioned field work will always remain the true joy of her job.

“You go to spectacular places and work with amazing animals,” she says. “Sometimes I can’t believe they actually pay me to do this. You cannot be handed the data and have the same feel for it. Field work give you an insight you would not get otherwise.”