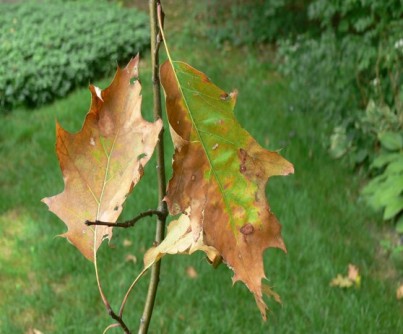 Dying oak leaves as a result of oak wilt disease. 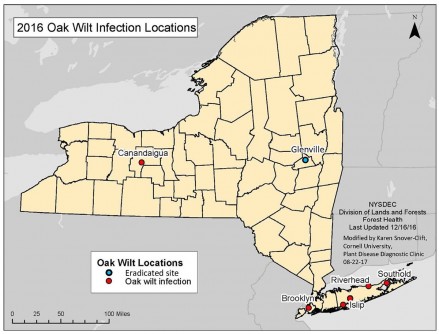 Map of all the locations in NY state where oak wilt has been detected, including the town of Glenville in Schenectady County, where it has been eradicated.

The disease previously had been found only in Schenectady County in 2008 and again in 2013, prior to new locations confirmed in 2016.

On Long Island, oak wilt has been found in Suffolk County. It was first found in the town of Central Islip last April, and then in three additional sites in the towns of West Islip, Southold and Riverhead, confirmed in following months. Though the trees have not been removed, the New York State Department of Environmental Conservation (NYSDEC) is conducting surveys and monitoring these areas closely.

Another confirmed case of oak wilt occurred late last summer, at the Greenwood Cemetery in Brooklyn. The infected tree was removed and the NYSDEC and cemetery staff are closely monitoring surrounding trees and sending samples to the Cornell University Plant Disease Diagnostic Clinic (CU-PDDC).

Oak wilt is caused by a fungus, Ceratocystis fagacearum, that gums up and plugs water-conducting vessels in the tree, causing leaves to wilt and fall, leading to the tree’s death in as little as three weeks. The pathogen is only contagious during warm months between April and November. Since there is no known cure, the only recourse for an infected tree is to remove it and monitor healthy trees surrounding it.

To make the most cost-effective and prudent management decisions for each area, NYSDEC will need to gather more information. If the disease has spread to nearby trees, protective measures beyond removing individual trees will be required. In the past, most of the positive identifications have occurred late in the summer and in the fall, so the agencies are waiting for all the samples to come in.

CU-PDDC diagnosed the new oak wilt infections from samples sent to them and through surveys as part of a New York State Department of Agriculture and Markets (NYSDAM) Specialty Crop Block Grant that promoted a collaborative project with the NYSDEC and NYSDAM to monitor and control the spread of the disease in the state.

“The concern is that this is one of the most devastating diseases of oak trees, and we want to do our best to keep it out of New York state or confined to the smallest area possible,” said Karen Snover-Clift, director of CU-PDDC. “Having eyes and ears out there looking for symptoms is something we need to increase our chances of successfully eradicating the pathogen or at the very least, keeping it confined.”

To this end, Snover-Clift conducts trainings around the state to teach people about the disease and how to identify it. Disease symptoms include:

Leaving diseased trees poses risks, as beetles or infected roots grafting onto healthy ones can spread the disease. But removing trees is expensive, and full treatment requires removing all oaks within a 150-foot radius of each infected tree. Samples taken this year will help state officials better understand the extent of disease spread and will provide data for adjustments to the management plan.

Managing oak wilt in a cemetery requires special considerations, out of respect for the graves.

“One traditional way of managing this disease is through trenching, where they try to break root connections so they are not transmitting the disease from tree to tree, but as you can imagine, in a cemetery that’s not practical,” Snover-Clift said.

Shortly after the Long Island and Brooklyn identifications were made, a positive identification was made on a sample from Canandaigua. A diseased red oak was removed, and an oak free zone was established with an additional eight trees removed and the area was trenched. Two other mature oaks growing very near the infected tree were tested and came up negative.

“So far this year, we’ve received around 70 of the 200 samples we are expecting from everywhere in the state, and so far we are happy say we have no new cases of oak wilt to report,” Snover-Clift said, though she cautioned that most of the previous positives have been submitted in the later summer months and into the fall.

One important management strategy is to inform people to be careful about moving wood, as the disease can be spread when firewood from an infected tree is moved, and the fungus is introduced to healthy trees via the beetle vectors.

For more information and to submit samples, visit the CU-PDDC website.