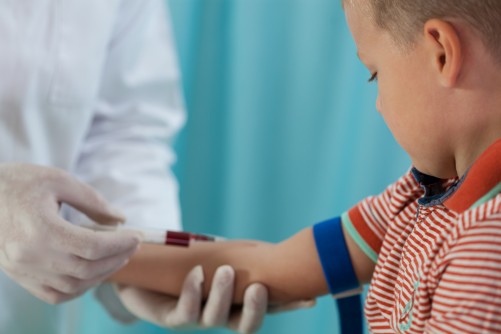 Newswise — A non-invasive test to diagnose and monitor an inflammatory disease that injures the esophagus – called eosinophilic esophagitis or EoE – would replace the need for repeated endoscopy for a growing number of children and adults with this relatively new condition.

First described in children in 1995, EoE is becoming increasingly prevalent, affecting an estimated 1 out of 10,000 people. It occurs when a type of white blood cell called the eosinophil, migrates to the esophagus in large numbers, causing inflammation. This abnormal immune response is often triggered by certain foods, and it is treated primarily by modifying the diet or by swallowed forms of steroids used in asthma. Left untreated, EoE can result in scarring of the esophagus which then becomes narrowed and does not allow food to pass down.

Symptoms vary by age. While difficulty swallowing is a cardinal feature of EoE in teens and adults, school aged kids with this condition also may suffer from abdominal pain, nausea and vomiting. Infants and toddlers might show aversion to solid foods and feeding difficulties.

Currently, the only means to diagnose EoE is through upper endoscopy to obtain biopsies of the esophagus. This is done under general anesthesia and has to be repeated as often as three or four times a year to assess treatment response.

“Upper endoscopy is invasive, expensive, and results in many missed days of school for children, as well as forced time off from work for their caregivers, thereby increasing the overall burden of this disease,” says Barry Wershil, MD, Division Head of Gastroenterology, Hepatology and Nutrition at Ann & Robert H. Lurie Children's Hospital of Chicago and Professor of Pediatrics at Northwestern University Feinberg School of Medicine.

“Developing a highly sensitive and specific blood or urine test for EoE would be better for patients and reduce healthcare spending,” he adds. But first, scientists need to identify inflammation markers in blood and urine that reflect EoE.

Dr. Wershil and colleagues are tackling this challenge. They are correlating a number of potential biomarkers with data gleaned from biopsies when participating patients undergo endoscopy.

“We also are evaluating how biomarker levels change over time in the same patient, especially in response to treatment. This adds a critical step to previous studies that have identified promising biomarkers for EoE,” he explains. “The results will be more meaningful and predictive of disease activity.” Funding for this research comes from the American Partnership for Eosinophilic Diseases.

With an ever increasing number of children with EoE and related diseases seen over the last decade, Lurie Children’s has developed a specialized, multidisciplinary program for these patients. Experts at Lurie Children’s currently follow over 500 children with eosinophilic diseases of the gastrointestinal tract, and offer cutting edge clinical care and research protocols to better define and treat these chronic diseases.

Ann & Robert H. Lurie Children’s Hospital of Chicago is ranked fifth in the nation in pediatric gastroenterology by the U.S.News & World Report. Research at Lurie Children’s is conducted through the Stanley Manne Children's Research Institute. The Manne Research Institute is focused on improving child health, transforming pediatric medicine and ensuring healthier futures through the relentless pursuit of knowledge. In partnership with Northwestern University Feinberg School of Medicine, our scientists work in labs, in clinics, at the patient bedside and in the community to unravel the root causes of pediatric and adolescent disease, to understand childhood injury and to find factors that precipitate health problems in childhood and over a lifetime. Our researchers work every day to develop new therapies and prevention strategies.