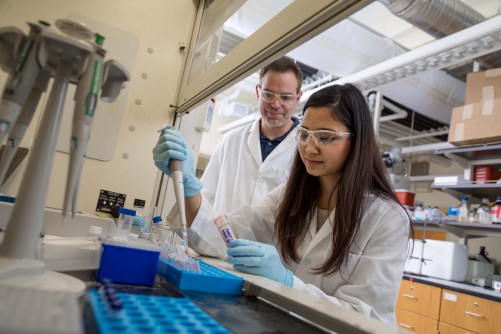 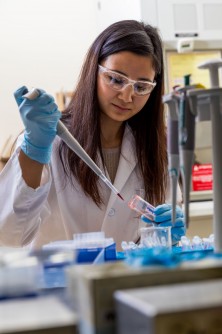 Newswise — To develop antidotes for chemical agents, such as cyanide and mustard gas, scientists need analytical methods that track not only the level of exposure but also how the drug counteracts the effects of the chemical. That’s where the work of Erica Manandhar, postdoctoral research associate at South Dakota State University, comes in.

Several Food and Drug Administration-approved antidotes are available for cyanide poisoning, but they have severe limitations, explained Manandhar, who completed her doctoral work in the Department of Chemistry and Biochemistry in December 2017. She developed the first analytical method to evaluate a new cyanide antidote, dimethyl trisulfide (DMTS), and a method of quickly detecting a substance associated with exposure to sulfur mustard.

Her research adviser, professor Brian Logue, has been developing countermeasures to deal with exposure to cyanide and other possible chemical weapons for more than a decade through support from the Department of Defense and National Institutes of Health. Logue developed a method of detecting cyanide exposure in 60 seconds from a blood sample and is working toward getting FDA approval for a portable device called a cyanalyzer.

Manandhar said, “I’ve always been interested in science to solve problems that impact people’s lives. Working with Dr. Logue on cyanide and chemical warfare agents, I can help find answers to questions of great concern in the modern world.”

“DMTS does not depend on any other body enzymes so it can work on its own. It can easily penetrate the cell membrane and blood-brain barrier and it can be administered intramuscularly—that’s important when you’re dealing with mass casualties in the field,” Manandhar said.

To evaluate an antidote in animal models, scientists must understand the rate at which the antidotes enters the body, how it neutralizes the cyanide and how the body excretes or metabolizes it.  “Scientists need to know what the drug is doing in the body,” said Manandhar. The analytical method she developed determines DMTS levels in blood.

Researchers working on DMTS as a cyanide antidote send samples from their animal studies to Manandhar for analysis as they work toward FDA approval. Their collaborative work is funded through the National Institutes of Health Countermeasures Against Chemical Threats (CounterACT) Program, which supports the development of new therapeutics to prevent and treat injuries from toxic chemicals, which can be released through an industrial accident or as a terrorist attack.

Nearly a century after sulfur mustard, commonly known as mustard gas, was first used as a chemical warfare agent in World War I, there is still no antidote.  Exposure to mustard gas, either as a liquid or a gas, causes blistering of the skin and mucous membranes, according to the Centers for Disease Control and Prevention. Victims may not know they’ve been exposed for hours or even days and the vapor can be carried by the wind.

“The main way mustard gas kills is through respiratory damage,” Manandhar said, pointing out sulfur mustard was used in the 1980s during the Iran-Iraq War and, more recently, in Syria. “Researchers are trying to understand how this toxicity happens, what we can do to mitigate it and what drugs have the potential to do this. “

The end goal is to develop antidotes, but to do so, scientists need to determine exposure level so they know how effective the treatment is, Logue explained. “That’s where we come in.”

Determining the inhaled dosage is difficult because breathing rate and lung volume differ, explained Manandhar, who screens samples from animal studies conducted at the University of Colorado-Denver. The research is also supported by NIH CounterACT.

“We look for biomarkers—what mustard gas converts to—to develop accurate inhalation toxicity studies,” Manandhar said. For her dissertation research, Manandhar developed a method of detecting sulfur mustard oxide, a biomarker of sulfur mustard exposure, in plasma. “It appears in the body right away after exposure and Erica’s analytical method identifies the marker in 15 minutes,” Logue explained.

“The plan is to use the biomarkers to create a diagnostic for mustard gas,” he continued. However, Logue cautioned, only a small number of studies have been done. More work will be needed to confirm that the biomarkers they’ve identified will correlate to the actual inhaled dose. Though there is much yet to be done, scientists are making progress toward developing an antidote for a chemical warfare agent that has threatened world populations for decades. 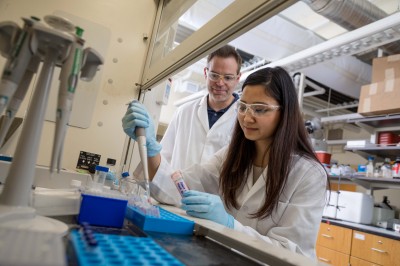 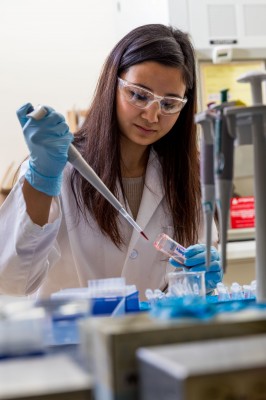 Journal of Chromatography A, 2016; Cyanide antidote and sulfur mustard metabolites, 2017